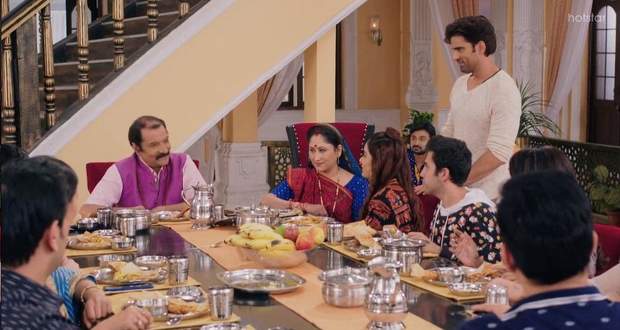 Shashikant tells Sneha that he will handle Nutan in his way. Meanwhile, Subhadra is impressed by Sonam for reacting calmly and friendly in front of Sheetal.

Subhadra tells Sonam that her life is going to be full of struggle in Dhruv’s house. Sonam answers her that she will handle everything with ease.

Sonam and Dhruv get closer as Dhruv helps Sonam in eating through his hand, while Nutan leaves the dining table on witnessing Dhruv and Sonam closeness.

Later, Nutan tells Shashikant that Sonam is not the right girl for Dhruv. Shashikant gets angry and is about to slap Nutan.

He shows Nutan the video of her talking to Sheetal about their plan to halt Dhruv and Sonam’s marriage. Shashikant tells Nutan that Dhruv will be hurt by witnessing his mother trying to call off his wedding.

Shashikant gives two choices to Nutan, either to behave according to him or to reveal her real self by showing the video to everyone.

Shashikant joins everyone on the dining table, while Nutan tells Dhruv that she will feed Sonam. Dhruv’s mother Subhadra asks Dhruv to come and sit with her so that she could feed him.

© Copyright tellybest.com, 2018, 2019, 2020. All Rights Reserved. Unauthorized use and/or duplication of this material without written permission from tellybest.com is strictly prohibited.
Cached Saved on: Tuesday 24th of November 2020 06:41:13 AM