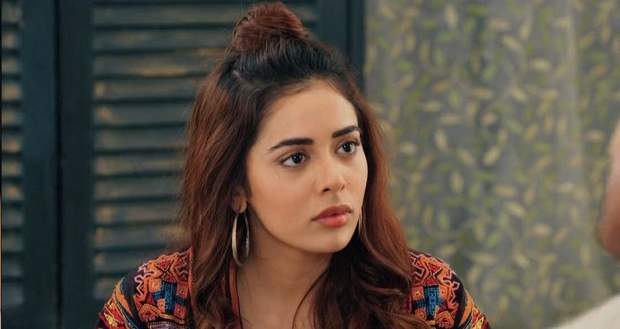 Today's Lockdown Ki Love Story 17 Sep episode starts with Dhruv trying to make Soham understand that he will take care of everything. Soham scolds him for being so diplomatic and for not supporting her.

Sonam tells Dhruv that they should elope to get married, while Shashikant tells Subhadra that they should give some time to both the families and then to decide anything for Dhruv and Sonam marriage.

Sonam rushes to tell her decision to the family that she is going to marry Dhruv the same day in the home temple. She tells everyone that both of them don’t care about anyone’s decision.

Dhruv asks Sonam to keep quiet and not to spoil their relation. Sonam informs him that she doesn’t want to get married without their parent’s wishes.

Dhruv gets angry and announces that the marriage is canceled, while Sonam also calls off the marriage. Nutan feels happy about Dhruv’s decision and asks everyone to stop worrying about anything.

Everyone hears an ambulance horn outside the house, while Shashikant rushes to see what happened. A police officer announces that there is a COVID patient in their locality who is not cooperating with them.

Dhruv makes a call to the patient Krishna and everyone hears his phone ringing on his terrace. All of them requests Krishna to come downstairs to cooperate with the hospital staff.

Krishna shouts from the top that he doesn’t have any COVID symptoms so he will not go to the hospital. Meanwhile, Pratap prays to God to help him and his family to get out of Prayagraj.

Dhruv suggests the police officer to use the ladder to reach on the terrace, while Sonam tells them to they should approach Krishna with compassion.

Everyone starts looking for Sonam around, while Sonam wears the PPE kit and goes on the terrace to convince Krishna to cooperate with the medical staff.