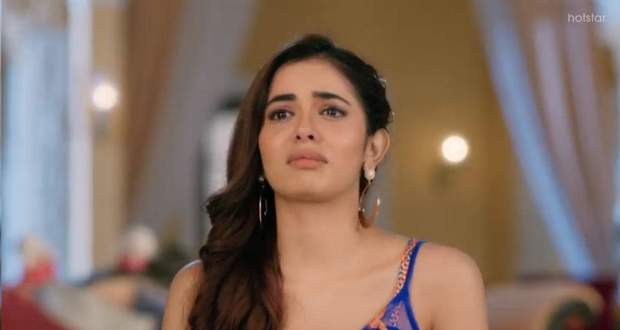 Today's Lockdown Ki Love Story 1 Sep episode starts with Sonam getting tensed on knowing about 3 weeks lockdown in the country. She starts overreacting, and Dhruv's family gets surprised to see her behavior.

Dhruv tries to calm down Sonam, while Sonam tells him that she has done all the preparations for her marriage. Sonam’s mother asks Sonam to stop overreacting. Dhruv tells Sonam that they will find a way to get out of this problem.

Sonam tells him that marriage functions are very important for her. Dhruv gets angry with her and asks her to adjust to the situation, otherwise they would have to cancel the marriage. Sonam leaves from there, while Dhruv’s brother throws water on Dhruv’s head to cool him down.

Dhruv’s mother asks Dhruv’s father to tell the Goyals to leave, whereas he tells her not to think rubbish. Meanwhile, Pratap complains about the Jaiswals to his wife and finds ways to leave from Prayagraj.

Dhruv calls his friends in front of Sonam to get all the pink dresses from the city which are similar to Sonam’s dress. Sonam apologizes to Dhruv for overreacting in front of everyone.

Both the families get together on the dining table. Sonam asks Ankita to sit and have dinner with everyone. Dhruv’s father informs her that the ladies of their house eat after the gents have their food.

Sonam objects it and tells everyone that she will eat with Dhruv, and even asks Ankita and Dhruv’s mother to have food along with their husbands. Sonam’s parents get into an argument as Sonam’s father starts pointing out the mistakes of Jaiswal's.

© Copyright tellybest.com, 2018, 2019, 2020. All Rights Reserved. Unauthorized use and/or duplication of this material without written permission from tellybest.com is strictly prohibited.
Cached Saved on: Wednesday 28th of October 2020 05:32:33 PM