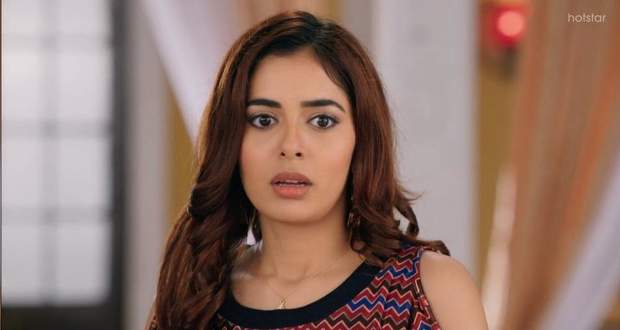 Today's Lockdown Ki Love Story 3 Sep episode starts with Sheetal getting shocked to know that Sonam is going to be the new daughter-in-law of the Jaiswal family.

Dhruv leaves from there to put the riffle at its place. Sonam follows Dhruv and asks him if he remembers the time when they used to spend their nights talking to each other.

Dhruv tells Sonam that his father scolded him a lot for meeting Sonam at late at night. Sonam apologizes to Dhruv and tells him that from the next time they will meet after informing Dhruv’s father.

Dhruv tells Sonam that they should not do anything that would make his father angry. He asks her to go to sleep and leaves from there to go to his room.

The next morning, Shashikant performs religious prayers and Pratap arrives there and asks Shashikant to lower his voice while chanting the prayers.

Shashikant tells Pratap that chanting loudly helps in getting the peace of mind. Pratap points out Shashikant for being shirtless and chanting to get wealth in the house and tells him that it reflects Shashikant’s blind faith.

Dhruv arrives there and gets worried to see Shashikant and Pratap arguing with each other. Sonam comes there in short clothes and Dhruv’s family gets shocked to see her like this.

Dhruv immediately takes Sonam to her room and asks her to not to wear short clothes in his house. Sonam decides to tell everyone that she is not comfortable in a full-body night suit.

Dhruv rips Sonam’s dress by mistake and gives her the blanket to cover herself. After that, Sonam and Dhruv spend a cute moment together.

Later, everyone gets surprised to see Sonam in traditional wear. Dhruv’s mother asks Sonam to prepare tea for everyone. Dhruv comes to rescue Sonam from the challenge as she doesn’t know how to prepare tea.