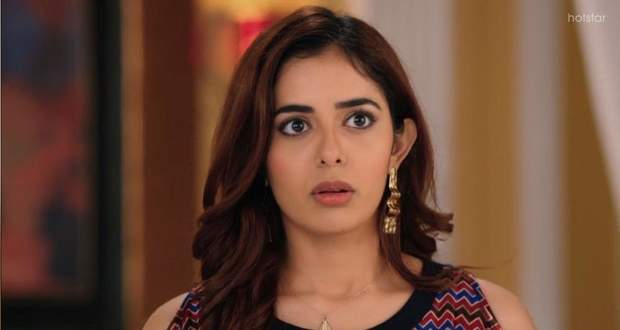 Today's Lockdown Ki Love Story 4 Sep episode starts with Ankita helping Sonam in preparing tea for everyone. Sonam tells Ankita that she doesn’t know cooking and Ankita tells Sonam that eventually, she will learn how to cook.

Dhruv’s mother arrives in the kitchen and scolds Sonam for getting late in bringing tea for everyone. Ankita gives a signal to Sonam that tea will be prepared in 3-4 minutes.

Meanwhile, Sheetal starts overreacting for not getting tea. Dhruv asks Sheetal to have some patience and tells her that Sonam is preparing special tea for everyone.

Sonam attends a call and forgets to turn off the flame. She gets shocked to see tea spilled out of the saucepan and hurts herself due to her carelessness.

Later, Dhruv witnesses Sonam hiding her hands and asks Sonam how she burnt her hands. Dhruv informs his mother that Sonam will prepare tea later, but Sonam denies and confesses that Ankita helped her in preparing tea.

Dhruv’s family gets shocked to know that Sonam doesn’t know cooking. Pratap tells Nutan that he has servants at his house so that’s why there was no need for Sonam to learn cooking.

Nutan taunts Sonam’s family for not teaching anything to their daughter. Sonam’s mother apologizes to Nutan for her mistake of not letting Sonam enter the kitchen since Sonam’s childhood.

Sonam asks Nutan and Ankita to teach her how to cook food and tells them that she and Dhruv will cook together. Nutan leaves from there and gets angry with Sonam for thinking to make Dhruv do the household chores.

Elsewhere, Sonam starts preparing tea for everyone and Dhruv gets romantic with her. Sneha asks Dhruv to teach her evolution, while Sonam tells Sneha that she will teach her the topic of evolution.

Nutan makes a call to the priest to fix the date for Dhruv and Sonam’s marriage. Sonam arrives there and offers tea to Nutan and Sheetal.