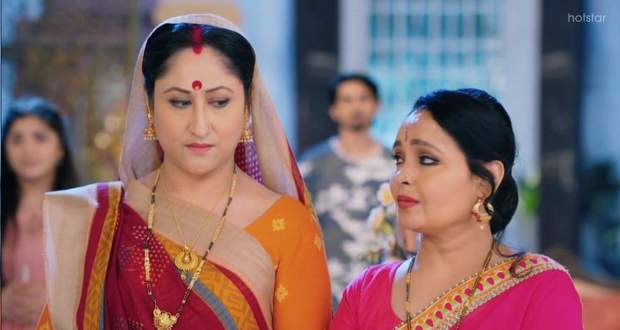 Today's Lockdown Ki Love Story 5 Sep episode starts with Pratap getting concerned for Sonam after witnessing the conservative mindset of Jaiswal's. Sonam’s mother takes a stand for Sonam’s decision of getting married to Dhruv.

Dhruv gets tensed when his friend tells people outside that Sonam doesn’t know cooking. Sonam asks Dhruv to calm down, while Dhruv tells Sonam that it is a big issue in Prayagraj if a girl doesn’t know how to cook food.

Meanwhile, Tanu prepares salad for herself in the kitchen. Sheetal arrives there and tells Tanu that Ankita will prepare a salad for her as Ankita knows cooking very well.

Nutan and Sheetal scold Ankita for taking Sonam’s stand and helping her in preparing tea secretly. Nutan asks Ankita to prove her faith in her in-laws by eating whatever Nutan will make her eat.

Shashikant calls Neeraj to make a call to Pratap’s wedding planner and order him to return the cancellation amount to Pratap. Shashikant gets a call from the priest and then he asks everyone to get together in the hall.

Shashikant informs everyone that according to the priest, there is no date available for Dhruv and Sonam’s marriage in 2020 other than the date they fixed previously.

Dhruv and Sonam get upset as they can’t get married at the fixed date due to the lockdown. Sheetal and Nutan recall their plan when they asked the priest to postpone Dhruv and Sonam’s marriage date.

Upcoming Lockdown Ki Love Story episode update: Sonam to ask for getting married in a church.