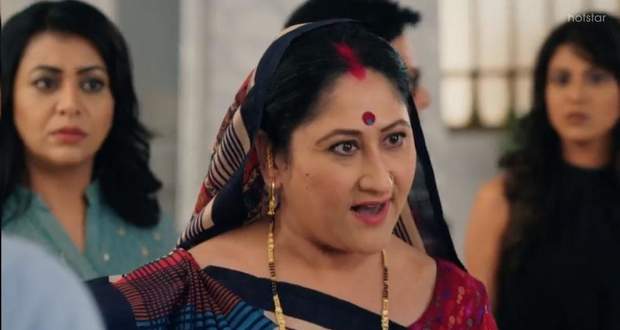 Today's Lockdown Ki Love Story 7 Sep episode starts with Sheetal trying to stop Dhruv from calling the priest. Nutan asks Dhruv and Sonam to wait for some time to get married as told by the priest.

Pratap agrees to Nutan and tells to postpone the marriage. Sonam gets emotional and tells Dhruv that she doesn’t want to wait for a year.

Nutan interrupts them and informs Sonam that they have to follow the custom and religion. Dhruv tries to console Sonam and tells her that they will find a solution.

Later, Sheetal and Nutan get happy in getting success in their plan to postpone Dhruv’s marriage. Elsewhere, Sonam’s mother taunts Pratap for faking their relationship in front of everyone.

Dhruv arrives in Sonam’s room, while Sonam tells Dhruv that she is going to tell her idea to the family members. Sonam calls everyone to get together and informs them that she has a plan to get married in the church.

Everyone gets shocked to hear Sonam’s idea, while Nutan gets angry with Sonam for being so uncultured.

Sonam’s mother tries to calm down Nutan, whereas Nutan tells Sonam that she has to follow all the rules to become her daughter-in-law.

Sonam gets emotional and leaves from there. Tanu asks Nutan to not to scream, while Shashikant tries to handle the situation. He apologizes to Sonam’s family on behalf of Nutan’s rude behavior.

© Copyright tellybest.com, 2018, 2019, 2020. All Rights Reserved. Unauthorized use and/or duplication of this material without written permission from tellybest.com is strictly prohibited.
Cached Saved on: Thursday 24th of September 2020 06:57:55 PM