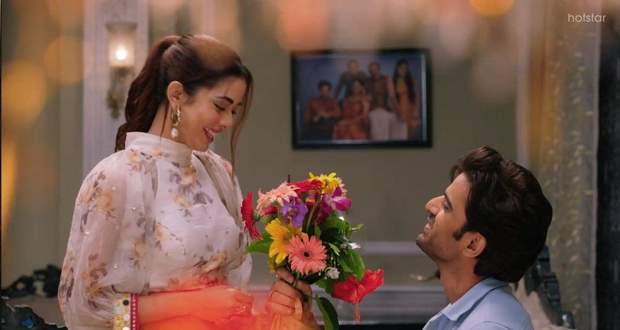 Sonam tells Dhruv that she is very hurt because of his mother’s rude behavior. Dhruv asks Sonam to count till 50 with her closed eyes.

Meanwhile, Shashikant scolds Nutan for humiliating Sonam in front of everyone. Nutan tells him that Sonam is taking their son away from his parents.

Shashikant makes Nutan recall the time when Dhruv came to them to express his feelings for Sonam and they both agreed to his marriage at that time.

Nutan tries to argue with Shashikant but he scolds her for insulting their guests and warns her to not say anything rudely to Sonam ever again.

Nutan mutters that she will not let Sonam ruin Dhruv’s life. Elsewhere, Sonam completes the counting till fifty and gets surprised to see Dhruv’s friends outside the window.

Dhruv offers flowers to Sonam and tries to cheer up her upset mood. Dhruv’s friends hand over a guitar to Dhruv, while Dhruv plays it and sings a love song for Sonam.

Nutan and Sheetal notice Sonam beating Dhruv while playing guitar. They both start planning to break Dhruv and Sonam’s relationship

© Copyright tellybest.com, 2018, 2019, 2020. All Rights Reserved. Unauthorized use and/or duplication of this material without written permission from tellybest.com is strictly prohibited.
Cached Saved on: Thursday 24th of September 2020 09:03:59 PM