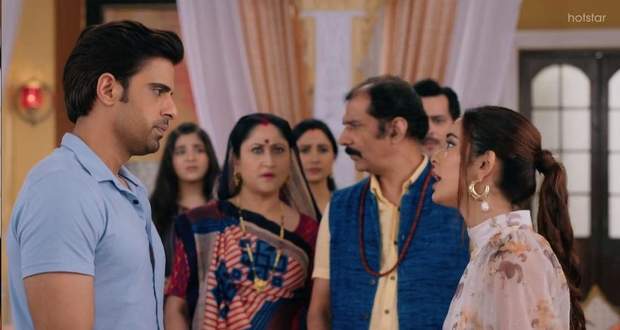 Today's Lockdown Ki Love Story 9 Sep episode starts with Shashikant asking Pratap to play Ludo with him. Pratap refuses to play but Shashikant forcefully takes him to the Ludo table.

Pratap taunts Shashikant for talking too much, while Shashikant tells Pratap that he used to be a scrap dealer in his childhood.

Pratap gets surprised when Shashikant starts shouting like a scrap dealer. Later, Sonam prepares tea for the family, and everyone compliments Sonam for preparing fabulous tea.

Sonam informs Dhruv that she is going to complete his office work. Meanwhile, Shashikant praises the virtues he has inherited in his children.

Pratap questions Dhruv that whom will he choose if there is an option between family and career. Dhruv tells Pratap that he will always choose his family.

Shashikant asks Dhruv to choose one between Mumbai’s life and Prayagraj’s life. Dhruv chooses his family and says that he would leave his job anytime his parents ask for it. Elsewhere, Sonam’s brother rushes to Sonam’s room to get the tab and informs Sonam that she is going to quit her job very soon.

Sonam runs to the hall and questions Dhruv about his decision of shifting from Mumbai to Prayagraj. She recalls the time when they decided to not to shift to Prayagraj when his parents grow old.

Sonam refuses to quit her job and tries to make Dhruv’s father understand that she loves her career very much. She asks Dhruv’s parents to shift to Mumbai anytime they want to.

Dhruv disagrees with Sonam and asks her to not to talk to his father in that way. Sonam tells Dhruv that either he is lying to his family or he lied to her in the past.

© Copyright tellybest.com, 2018, 2019, 2020. All Rights Reserved. Unauthorized use and/or duplication of this material without written permission from tellybest.com is strictly prohibited.
Cached Saved on: Monday 30th of November 2020 07:10:14 PM