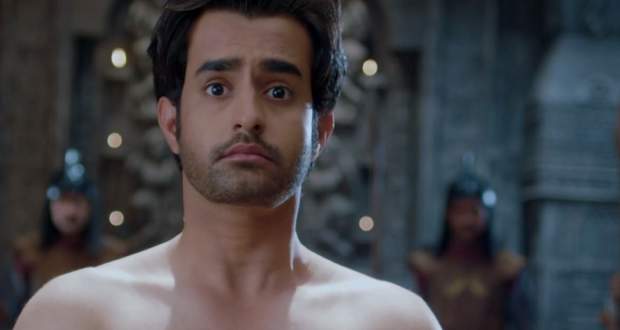 Today's Maharaj Ki Jai Ho 30 Mar episode starts with the soldiers finding someone unconscious. Sanjay drops someone in his car who demands to listen to a song again.

Sanjay asks for payment but is left with only egg. Meanwhile, in the court, Shakuni asks for a necklace for Ghandhari while Sanjay is called there.

Maharaj reveals his wedding anniversary is approaching and he wants gift suggestions from Sanjay. Sanjay remembers his girlfriend and says he should give a precious necklace.

Sanjay is further asked to pick up the necklace. Further, the soldiers return without clothes. Meanwhile, Suryabhan is checked by a Vaid and reveals there is no illness within him.

Suryabhan’s wives leave for their parent’s house as they demand gifts. He decides not to fulfill their demands and proposes to marry again.

Shakuni gets further sad when Sanjay is called for solving the matter and drinks. He flirts with Albert who slaps him and leaves. Sanjay gets someone to work for him and leaves in his car.

However, the man is with Shakuni who steals the box. Later, Suryabhan gives pieces of small clothes to his wives while the wives get mad at him and leave.

Sanjay finds an unconscious girl on the road. The girl takes a lift and later asks for money from him. Elsewhere, Ghandhari is made to stand on one foot for a painting.

Maharaj is sure Sanjay will bring the necklace safe but Sanjay returns wearing only leaves in the court.