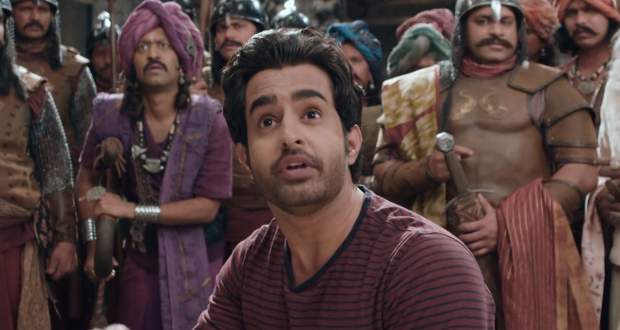 Today's Maharaj Ki Jai Ho 31 Mar episode starts with Suryabhan asking his Senapati if he wears the mask then Gandhari will greet him as Maharaj Dhritrashtra.

Senapati further says that Gandhari has a blindfold on her eyes. Albert arrives in Suryabhan’s court and shows his project of converting mechanical energy to electrical energy.

Albert expects an award while Suryabhan gets mad at him. Albert further shows him a hand fan which impresses him. Meanwhile, Maharaj asks Sanjay about getting robbed.

Sanjay explains the whole incident and gives the responsibility of getting the necklace to Shakuni. At the same time, Suryabhan arrives and shows the fan to Maharaj.

However, he gets shocked by the device and asks to bring the scientist back. Meanwhile, Albert as a woman gets a lift from Shakuni who flirts with him.

Shakuni makes her wear the precious necklace but Shakuni also gets robbed and returns dressed in leaves. Gandhari gets angry and decides to leave.

Albert tells Sanjay that he is going to Suryabhan’s kingdom. He reveals that he was also robbed by the same girl. Sanjay gets the idea of demonetization from his statement.

Sanjay suggests demonetization as a solution to his problems. He says they will create new money and the thief will also get caught. Albert gets trapped as he is being searched by the soldiers.

Albert is forced to change into the woman avatar again. Later, Sanjay and soldiers trap the wrong woman while the thief changes the coins. Sanjay further gets the letter from the girl to meet her.

Upcoming Maharaj Ki Jai Ho episode update: Sanjay goes to meet the girl but is trapped by some tribal people.