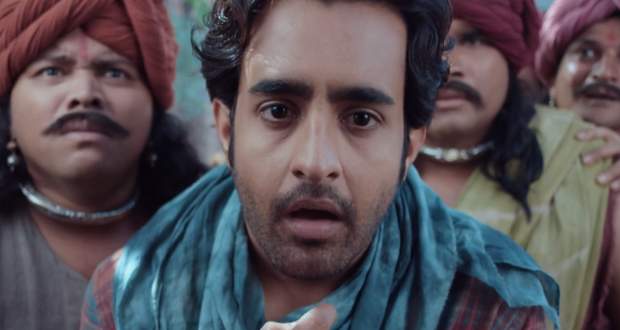 Today's Maharaj Ki Jai Ho 7 Apr episode starts with Sanjay asking Sunaina to not get into trouble as he goes to ask forgiveness from Maharaj Dhritrashtra.

Sunaina learns that she and Sanjay are in the wanted list. Meanwhile, Shakuni and his friend celebrate their victory as Shakuni will become the Maharaj.

Ghandhari wants to wait for Maharaj and further asks Shakuni to take the throne till he returns. Elsewhere, Sanjay lands into trouble when some kingdom people recognize him.

Mandakini wants Albert in the maid form to work hard in the palace. Shakuni arrives and says he will punish Albert and asks Mandakini to leave.

Shakuni asks Albert to marry him and later Duryodhan refuses to put the crown on Shakuni’s head. He is forced to put the throne and fires the Mahamantri first.

At the same time, Senapati arrives and reveals that Sanjay is alive. Sunaina is wearing Senapati’s clothes and also hits the soldier searching for her.

Sanjay enters Maharaj’s room and thinks Dhritrashta is in there. Shakuni is present instead of Maharaj and Sanjay continues to speak against Shakuni.

Sanjay escapes from the room and learns that Shakuni is getting married to Albert. Sanjay confronts Albert and asks what he will do about the Suhagraat. He escapes from the window and Senapati catches him.

Upcoming Maharaj Ki Jai Ho episode update: Shakuni and Albert are all set to get married.