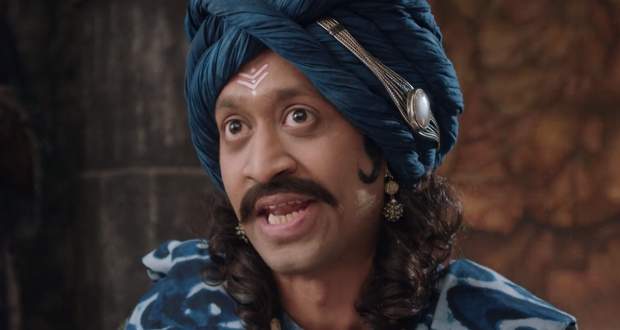 Today's Maharaj Ki Jai Ho 8 Apr episode starts with Sanjay escaping from the soldiers. The soldiers catch him and the Senapati asks to put him in the jail.  Sanjay manages to escape with Sunaina.

Later, Sunaina and Sanjay are shocked to see Dhritrashtra alive and well roaming in the jungle. Maharaj is still searching for the lion in the jungle.

Meanwhile, Shakuni is all set to marry Albert while the soldiers don’t believe that Dhritrashtra is alive. Maharaj is happy with Sanjay and makes him his little brother.

Sanjay tells him that Shakuni is planning something dangerous for him. Elsewhere, Shakuni is asked by the priest to give more money to complete the wedding rituals.

At the same time, Shakuni learns that Maharaj is alive and leaves from the Mandap. Maharaj reaches his kingdom and forgives all the bad deeds of Sanjay.

Sunaina is also given the post of his personal soldier. Meanwhile, Shakuni is in the kingdom of Suryabhan who says he has defeated Dhritrashtra multiple times.

Suryabhan also tells his back story of losing to Dhritrashtra and Shakuni realizes he was lying. Shakuni gives one idea to beat Dhritrashtra.

Shakuni comes to meet Maharaj and tricks Dhritrashtra in believing that kingdom people are saying Maharaj is a coward. Suryabhan sends a message about challenging in a mud fight.