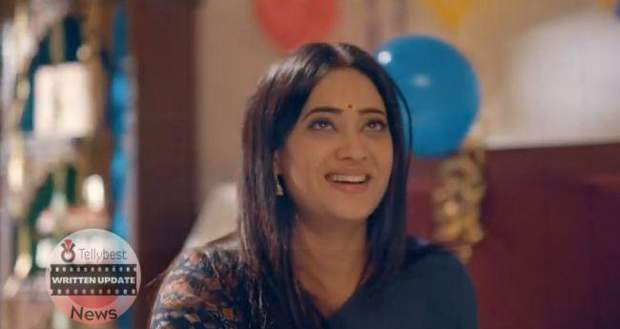 Today's Main Hoon Aparajita 11th November 2022 episode starts with Disha and Asha taking away Amma with them in the fake getup of nurses.

Mohini asks them why they are here when the hospital has not sent an ambulance yet.

Disha handles the situation by acting as if someone has pranked them and proceeds to take Amma out of the ambulance but Mohini stops them.

Mohini tells them to go with Amma at the earliest and says that they will follow after them.

Nia sees a glimpse of Asha’s face as her mask slips off and gets fascinated to see their courage to take Amma out with them.

Aparajita comes back to her house with a new dining table and finds the house decorated with flowers and balloons.

As Aparajita smells the delicious scent of kheer, Amma comes out with her daughters and gives her a surprise.

Aparajita gets overjoyed on seeing Amma in the house and shares a loving hug with her.

Amma asks everyone to line up as she will make everyone feed her special kheer.

Everyone enjoys the kheer together while Mohini gets worried about Akshay fretting over her after knowing Amma’s case.

Nia reveals to Mohini that she knows where Amma is which leaves her shocked.

Akshay gets to know about a shocking thing while he visits the MLA for his business.

Meanwhile, Veer feels devasted after Chhavi declines him from seeing her anymore and goes to the roof of an abandoned building.

Veer video calls Chhavi from the rooftop and asks her to come there in 5 minutes, or he will jump down from there.

Chhavi leaves the house and reaches the rooftop searching for Veer.

Veer says that he wants to take a test of love on Chhavi as he wants to be sure that she also loves him to the extent he does.

Veer ties up Chhavi’s hands and feet and asks her to save him before he falls from the building by saying that she loves him.

Chhavi screams at Veer not to step further while he reaches the edge of the roof.

At the last moment, Chhavi saves Veer and confesses that she loves him as much as he does.

Meanwhile, Aparajita and others get worried about Chhavi after she goes missing.

Akshay comes there and reveals that Chhavi is having an affair with the son of the MLA.

Hearing that Aparajita goes blank while Akshay blames her upbringing for the current situation.

Akshay says that he should have taken back his daughters with him 15 years ago and regrets his mistake.

Just then, Chhavi enters the house making everyone stare at her with faces full of questions.

© Copyright tellybest.com, 2022, 2023. All Rights Reserved. Unauthorized use and/or duplication of any material from tellybest.com without written permission is strictly prohibited.
Cached Saved on: Monday 21st of November 2022 07:45:42 AMCached Disp on: Friday 9th of December 2022 03:59:02 AM