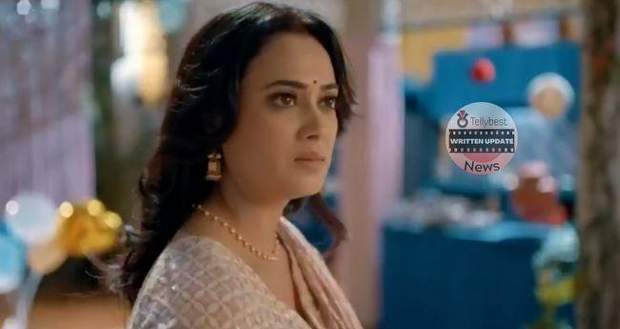 Akshay is also waiting for her and asks her if she has been with Veer.

Later, Aprajita snatches Chavi’s hand from Akshay’s grip and tells her to not worry and speak up as she has full faith in her.

Akshay arrogantly tells Chavi to tell the truth to Aprajita.

Seeing Chavi quiet, Aprajita questions her if he is right or not but Chavi admits to loving Veer.

Aprajita gets angry and tells her that she has proven to be her father's daughter and moves to slap her.

However, it was all in Chavi’s imagination whereas Aprajita is still calmly asking her to tell the truth.

Chavi apologises to Aprajita for lying about Veer and admits to loving him.

Akshay gets the chance to taunt Aprajita and criticises her upbringing.

Aprajita is in shock and reminds her how she use to share the smallest details of her life while asking her why did she not share this with her.

Meanwhile, Manish is telling Mohini about Chavi’s affair with Veer and the MLA’s threat to Akshay.

Mohini is delighted to hear the news and mocks Chavi’s innocence.

In the meantime, Chavi apologises to Aprajita again but Akshay grabs her hand and drags her away from Aprajita and tells her to never get in touch with Veer or else he will break her legs.

Aprajita comes to Chavi's defence and tells him to not shout at Chavi which Dadi also favours.

However, Akshay is not impressed with Dadi and tells Aprajita that it is his right to protect Chavi.

Aprajita gets angry and tells Akshay that he has no right over Chavi.

She reminds him how he has been neglecting his fatherly duties for years and now he has come to exercise his rights over Chavi.

However, Akshay tells her to not lecture him and tries to snatch Chavi’s phone while telling her to never contact Veer.

Aprajita tries to free Chavi’s bag when Akshay pushes her with force.

Chavi tells her that it is not Aprajita who has failed but she as a daughter.

Telling Aprajita that she never wanted to keep her in the dark, she tells Akshay that she loves Veer and supports his decision to beat Vicky.

She also tells him that Veer got angry at Vicky because he had misbehaved with him just like Disha.

However, Akshay never trusted her enough to get angry at Vicky and protect her. Therefore he should not talk about trust.

Akshay gets angry and raises his hand in anger as Chavi tells him that his concern is nothing but pretence.

Chavi goes away to her room in disappointment.

Meanwhile, Dadi tells him to take her back home as she cannot back out from her responsibilities.

Akshay threatens Aprajita before leaving, while Disha and Asha come to talk to her and badmouth Veer which Chavi resents.

He also tells Mohini that he is feeling sandwiched between her and Aprajita.

Later, Aprajita comes to talk to Chavi and berates her for breaking her trust in her.

She also tells her that now it will be very difficult for her to trust her ever.

© Copyright tellybest.com, 2022, 2023. All Rights Reserved. Unauthorized use and/or duplication of any material from tellybest.com without written permission is strictly prohibited.
Cached Saved on: Monday 21st of November 2022 11:53:37 AMCached Disp on: Thursday 1st of December 2022 11:30:01 AM