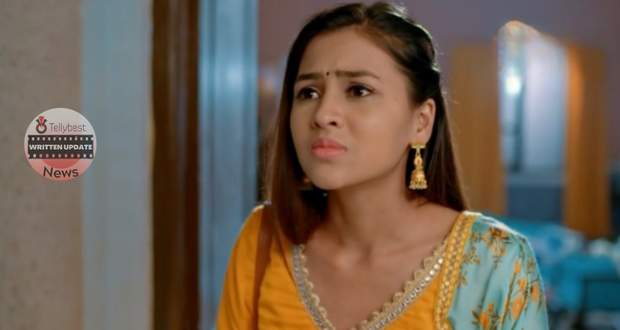 Disha tries to stop Veer and is about to hit him with a bucket when Aparajita comes there and stops her.

She reveals that she has called Veer there.

Chhavi looks at Veer as he goes forward to take Aparajita's blessings.

However, Aparajita tells him that it is fine and makes him sit to have food.

She serves him while he tries to apologize to her.

Aparajita tells him that it is fine and says that she shouldn't invite him to have food when he is the one who filed an FIR against her daughter.

Veer starts coughing suddenly while Chhavi reaches out to get him a glass of water.

Aparajita glares at her and she goes back while Aparajita tells Veer that she has invited him because she knows Chhavi likes him.

Further, Aparajita goes on to say that she might have judged him too quickly and says that she is ready to give him time and a second chance.

Veer looks down to respect her while Aparajita says that she is not against them but wants Chhavi to complete her education before.

Aparajita reveals that she wants them to be friends until they become something.

Veer gets happy and promises to not break the promise he made to her while Chhavi hugs her mother happily.

Later, Aparajita is talking to Dadi on the call about Chhavi while Veer and Chhavi are talking about not breaking Aparajita's trust.

Meanwhile, Akshay sees Chhavi talking to Veer and angrily goes to deal with them.

Dadi tells Aparajita that she still hopes Akshay and Aparajita would get back together.

However, Aparajita says that it is not possible since Akshay was the one who broke her trust.

Akshay walks up to Veer and starts manhandling him while threatening him.

Disha tries to stop Akshay but he pushes her away.

Aparajita comes there just then and makes Veer leave while telling Akshay that she has accepted his and Chhavi's friendship.

Akshay asks her what she means and she says that she will neither force her children nor will also not let him force himself on other children.

Blind with anger, Akshay tells Aparajita that people will question her upbringing.

Akshay leaves from there angrily and bumps into Nia while he starts venting about not being able to bond with his daughters.

He apologizes and leaves while she thinks that she will make her father reunite with her daughters.

At night, Veer talks to Chhavi on call and he tells her that he is going to keep the Karvachauth fast for her and she can keep the fast for him.

Further, he surprises her by emerging from her balcony and shows that he has carved her name into his skin where his heart should be.

He kisses her on the forehead before leaving while on the other hand, Disha tells Aparajita that they should keep an eye on Veer and Chhavi.

© Copyright tellybest.com, 2022, 2023. All Rights Reserved. Unauthorized use and/or duplication of any material from tellybest.com without written permission is strictly prohibited.
Cached Saved on: Monday 21st of November 2022 07:02:45 AMCached Disp on: Wednesday 7th of December 2022 02:32:51 PM