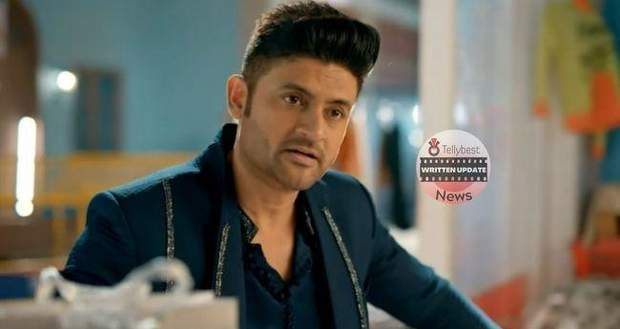 Today's Main Hoon Aparajita 17th November 2022 episode starts with Aprajita talking on the phone while cooking in the kitchen.

Afterwards, she serves food on a plate and sits to eat it.

Meanwhile, Akshay is fighting with a rioter and runs to save his life.

Meanwhile, Nia gets a call from Mohini where Nia tells her that she is out on Lunch and Akshay will join her soon.

However, the call gets disconnected in the middle while Nia apologises in her heart to Mohini for inviting her sisters to Lunch to make them patch up with Akshay.

Guggu tells Aprajita that there were police everywhere outside his house.

Aprajita tells him that it was all a rumour while she calls her daughter to find out where they are and when will they come.

Meanwhile, Asha reaches the hotel where Nia is waiting for them.

Seeing the hotel, Disha tells Asha to go to the food court as this place is quite expensive.

On the other hand, Akshay is hiding to save his life.

Elsewhere, Aashu tells her sister that her friend has invited them for lunch as she is giving treats to them.

Meanwhile, Chavi gets a message from Veer and tells her sisters that she will join them back in a few minutes.

Disha questions Chavi for not telling Aprajita about meeting Veer.

However, Asha tells her to let her go as Aprajita knows about the relationship.

Later, Disha asks Chavi if she is keeping a Karwachauth Vrat for Veer.

Chavi smiles and tells her that Veer has also kept a fast for her and she is going now because she will not be able to meet him at night.

Hearing that, Disha concluded that it was Chavi who has eaten the Sargi but Chavi denies eating it.

Later, Akshay tries to call Nia but she is not reachable.

Inside the hotel, Nia welcomes Asha and Disha while Asha apologises to Disha for lying to her about Nia.

Asha also tells Disha that she had eaten the Sargi for the safety of her family and Nia is also a part of their family.

Meanwhile, Pappi tells Aprajita that she should not have sent her daughters out when there are chances of riots in the city.

Just then Dollyy runs away and rioters come attacking their colony.

Aprajita tells Pappi to go inside while she goes to get Dolly.

Meanwhile, Disha sits with Nia and Asha at the table and orders a lot of food.

Meanwhile, Akshay saved someone from getting beaten and is now running from them while Aprajita searches for Dolly.

Elsewhere, Mohini's servant informs them about the riot and that it is very dangerous outside which makes Mohini worry for Nia and Akshay.

Just then Aprajita catches Dolly and hides behind a vehicle.

Akshay calls Nia telling her to stay at the restaurant and not come out.

Aprajita makes a call to the police station telling them to come soon as there s riots in the colony.

Seeing the food, Asha asks Disha if she can eat so much when Disha assures her that she will eat it all and that Nia's father is very rich and will pay the bill.

Meanwhile, Akshay calls Mohini and tells her that she will bring Nia safely from the restaurant and that she should not worry.

© Copyright tellybest.com, 2022, 2023. All Rights Reserved. Unauthorized use and/or duplication of any material from tellybest.com without written permission is strictly prohibited.
Cached Saved on: Monday 21st of November 2022 05:09:00 AMCached Disp on: Wednesday 7th of December 2022 04:37:10 PM