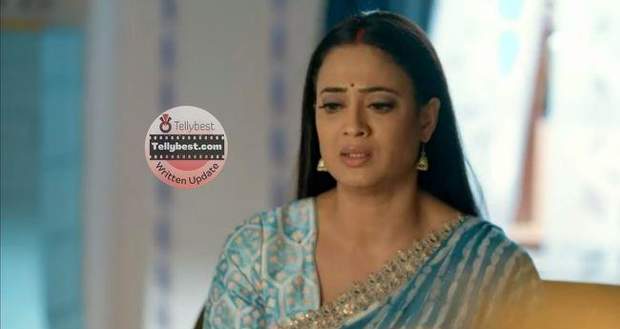 Today's Main Hoon Aparajita 1st December 2022 episode starts with Aparajita announcing that she will not allow the marriage between Chhavi and Veer this soon.

Akshay tells Aparajita that he has seen love in Veer’s eyes for Chhavi and believes that he will keep her happy without failing.

Aparajita replies that love is not everything for a happy marriage and narrates her own experience as an example.

Akshay gets salty and points out that it is because of Aparajita’s past experience that she does not want her daughter to be happy either.

However, Aparajita gets stunned upon hearing Akshay's comment while Amma asks Akshay not to accuse Aparajita of any blame.

Saying Aparajita was upset, Akshay apologizes and tells her that he said everything in anger and did not mean it by heart.

Aparajita says that she wants everything to be good for her daughter and uses her life experience to protect Chhavi from getting into the same trouble.

Amma agrees with Aparajita and says that whatever she is doing is the right thing for Chhavi and asks Akshay to agree with it.

Trying to make Akshay understand, Aprajita says that she wants Chhavi to achieve something in her life before getting married so that she can live independently.

Aparajita says that often daughters are married at an early age which gives them no time to achieve something ambitious in their life and she does not want her daughters to lead a life like that.

As Aparajita informs Akshay that she has informed the police about the video and wants to catch the culprit, Akshay bursts into anger and asks Aprajita why she involved the police in the case.

Aparajita mocks Akshay by saying that he was busy deciding the punishment for his daughter while she was looking for a solution.

Later, Chhavi asks Asha to look outside the room to see the situation going on between Akshay and Aparajita.

As Asha opens the door, Aparajita comes in and asks Chhavi to come out with her so that she can give her statement to the police.

Chhavi denies getting out of the room and answering the questions from the police and asks Aprajita why she decided to call the police without telling her.

Aparajita encourages Chhavi to confirm the police and reveal the truth as she believes in her that she has done nothing wrong.

The police ask questions to which Chhavi answers nervously while Akshay continues to interrupt them.

While Akshay asks Chhavi to stay at home, Aparajita denies doing so and announces that Chhavi will go outside as usual as she has done nothing wrong to be ashamed of.

The police complement Aparajita's decision and leave after listening to Chhavi's statement about the incident.

Later, Akshay reveals Aparajita's decision to lodge a complaint to the police to Mohini and Manish which makes the duo nervous.

Mohini assures Akshay that he is right and that Chhavi and Veer should get married as soon as possible.

© Copyright tellybest.com, 2022, 2023. All Rights Reserved. Unauthorized use and/or duplication of any material from tellybest.com without written permission is strictly prohibited.
Cached Saved on: Thursday 26th of January 2023 04:25:20 AMCached Disp on: Wednesday 1st of February 2023 10:25:53 PM