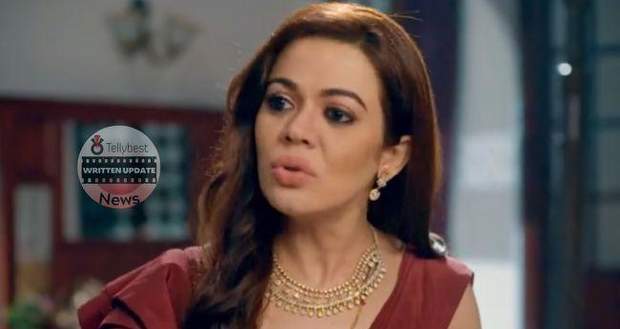 Today's Main Hoon Aparajita 1st November 2022 episode starts with Aparajeeta giving laundry to one of the customers who also happen to be her neighbour.

The lady apologizes for not being able to help them while Aprajeeta requests her to make rounds at Amma's house so that she doesn't feel lonely.

Just then, Disha comes there with Gagan laughing about the Mohini scene.

Aparajeeta asks her what she is laughing about while Disha says that it is nothing.

Meanwhile, Mohini comes there and asks Aparajeeta how dare she come to live with her neighbour.

Mohini angrily states that she knows why she is there and insults her by saying that she has everything of Aparajeeta's.

Mohini shows her Mangalsutra and says that she has her suhaag, husband and even her family.

However, Aparajeeta talks back firmly and says that the Mangalsutra is only a necklace on her neck and has lost its value.

Aparajeeta tells her daughters to go and decorate the house for the Kanyapooja as she will still follow the traditions of the family even if she doesn't live with them.

Mohini warns her saying that she will ruin her Kanyapooja while Aparajeeta throws water on her muddy face stating that she wishes she could remove the dirt from inside Mohini's mind too.

Mohini leaves angrily and calls her brother telling him to avenge her humiliation.

Later, while Aparajeeta and her daughter are preparing for the pooja, Minakshi (the landlady) comes there with goons and orders them to destroy the house while demanding that Aparajeeta leave.

Aparajeeta picks up a metal ornament and scares the goons who step back while telling Minakshi how the laundromat has fed her children for the past 15 years.

Aparajeeta asks Minakshi how she can raise the rent or kick her out without any prior notice to which Minakshi says that she doesn't care.

Just then, Mr Chhada comes there and apologizes to Aparajeeta for being late while she says that he is the only one who has helped her among all those neighbours she lived with for the past 15 years.

Minakshi asks her husband why he came there while Mr Chhada tells her to stay silent as he gives the 6-month extension later to Aparajeeta.

Minakshi feels defeated and leaves while Aparajeeta tends to Gagan and asks her if he's okay.

Elsewhere, Mohini's brother tells her that he could not get Aparajeeta kicked out which angers her.

Amma comes there and laughs saying that her daughter-in-law will do the Kanyaooja at any cost.

Back at Aparajeeta's house, she tells her daughter to not get discouraged by the tests of life and to enjoy them while trying to overcome all those problems.

Back at Mohini's house, Mohini orders her men to bring Amma's wheelchair to the top floor and threatens her saying that she will make her go to heaven if she doesn't stay like a lifeless doll.

Aparajeeta's daughters dress her up and take her pictures while the small girls and their mothers arrive.

However, the mothers reveal that they are going to Mohini's house as Mohini is going to give one gold coin to each girl.