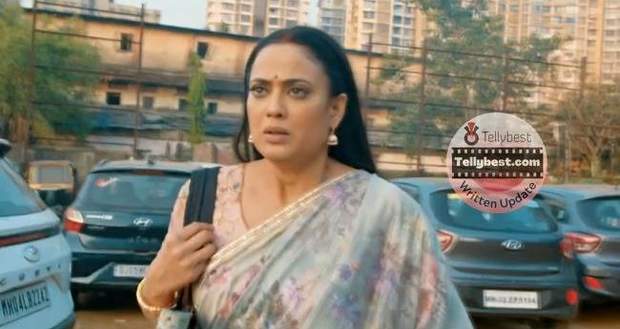 Today's Main Hoon Aparajita 20th November 2022 episode starts with Akshay fighting with a goon while Aparajita tries to enter the restaurant through a small gate.

On the other hand, due to suffocation, the girls have started feeling dizzy and Asha announces that she cannot break the window with heavy breathing.

Disha however urges Asha to keep going since it is their last chance to escape and with the last bit of energy Asha pushes herself to do so.

Meanwhile, the goon has pinned Akshay to the ground during which Akshay beats the goon with a stick.

Akshay then tip-toes to a nearby room where he finds two men playing cards and laughingly discussing the girls not coming out and dying due to gas.

Meanwhile, Asha finally breaks the skylight window and while passing by the hallway, Aparajita hears it.

When Aparajita appears under the skylight, she looks up and finds Asha looking down at her.

Aparajita then urges Asha to wait till she comes back with a ladder and Asha nods.

After a while, returning with a ladder, Aparajita orders Disha to pish Asha through the skylight so she can come down.

While Asha questions Aparajita about Chhavi’s safety, Aparajita hears the footsteps and quickly puts the ladder down.

Aparajita attacks the goon with a stick as soon as the goon comes into view like a fierce goddess and feels relieved after finding out that the goon is breathing still.

However, Aparajita feels disappointed when she notices the ladder is broken but urges her daughters not to lose hope.

On the other hand, while praying, Amma suddenly starts breathing hard but when she tries to reach for the medicine, it falls to the ground.

Entering the room at the same time, Mohini tells Amma that even though she does not like her, she will not let Amma die as Akshay loves her very much.

Mohini then gives Amma the medicine and as soon as Amma calms down, Mohini urges her to pray for Niya and Akshay’s safety.

In the meantime, Akshay decides to attack the goons but someone puts a knife on his neck which causes Akshay to stumble and fall.

Akshay even announces that he knows Sunil Thakur very well however it backfires when the goons tie him with a rope and beat him hard.

The Head of the mob orders his teammates to make a video of Akshay and send it to Sunil Thakur and if he withdraws his name from the election, they will not kill Akshay.

Aparajita who is watching this scenario from a distance feels torn as she does not know if she should save Akshay or her daughters.

On the other hand, while Veer and Chhavi are discussing their escape, a mob arrives outside and gets happy to see Sunil Thakur's son's bike there.

© Copyright tellybest.com, 2022, 2023. All Rights Reserved. Unauthorized use and/or duplication of any material from tellybest.com without written permission is strictly prohibited.
Cached Saved on: Monday 21st of November 2022 11:30:52 PMCached Disp on: Saturday 10th of December 2022 03:18:02 PM