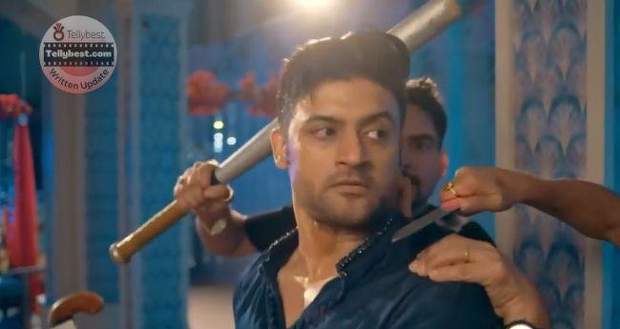 Today's Main Hoon Aparajita 21st November 2022 episode starts with Aprajita worrying about everyone and thinking of a way to save them.

Later, Aprajita comes back and tells Asha that she is finding a way to get inside and asks them to stay there until she comes for them.

The goons make a video and send a message to their boss telling him that this man calls himself the right-hand man of MLA.

Aprajita comes inside and thinks to distract the goons out of the house room and uses the can of kerosene to create a fire.

Meanwhile, MLA is telling the commissioner to do something else he will take their jobs.

MLA tells his secretary that they will use the opportunity of this riot in their favour and tells him to contact them.

In the meantime, MLA gets Akshay’s video and later a call telling him to take back his name from the election and then they will release his man.

Meanwhile, a goon is worried about his daughter while Akshay taunts him and tells him that he should have told his daughters that he is going to put the city on fire.

In the meantime, Aprajita helps Akshay get free while the goons get distracted.

Meanwhile, Veer and Chavi watch the goons come inside to capture Veer and whoever is with them.

Veer runs away to hide inside before they find him.

Elsewhere, MLA’s secretary advises MLA to not put his political career on the line for someone like Akshay.

Just then MLA’s wife comes to him worried about Veer and asks him to find out where Veer is.

However, MLA gets worried and angrily tells her that he has told him to stay home today.

Meanwhile, Veer and Chavi dodge one goon after other and keep themselves out of their sight.

Meanwhile, Aprajita is busy opening Akshay's ties and uses the knife to cut them while Akshay asks about his daughters.

Nia tries to call Akshay but it did not connect.

In the meantime, Veer and Chhavi continue to hide while the goons lurk around them.

Later, Disha tells Asha to eat something and break her fast while Asha refuses saying she has kept the fast for the family’s safety.

Nia goes to call Mohini and asks Disha if Aprajita has also kept a fast for Akshay.

Elsewhere, Akshay gets his ties released and groans with pain.

Meanwhile, Disha gets angry on hearing that it was Nia’s plan to call them here while Asha tells them that she is calling Chavi.

Just as Aprajita and Akshay open the door to leave, they find the goons standing at the door.

Later, the goon outside the kitchen window wakes up and looks around.

In the meantime, Veer and Chavi hide inside the almirah when Chavi's phone rings and alerts the goon about them.

Meanwhile, another goon drags the stair to the kitchen window and clubs up inside.

At the same time, Nia comforts Disha and Asha who have been worrying about Aprajita.

Elsewhere, the goon pushes Aprajita back into the room and tells her that she will not go from here alive.

Akshay tries to save her but the goons beat them badly.

Meanwhile, Asha shouts to see the goons inside the kitchen.

© Copyright tellybest.com, 2022, 2023. All Rights Reserved. Unauthorized use and/or duplication of any material from tellybest.com without written permission is strictly prohibited.
Cached Saved on: Monday 21st of November 2022 11:21:35 PMCached Disp on: Saturday 10th of December 2022 03:31:27 PM