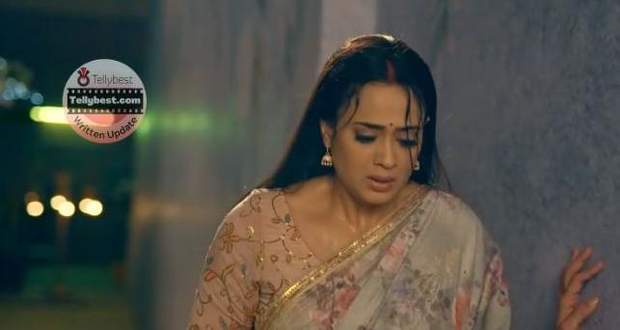 Today's Main Hoon Aparajita 22nd November 2022 episode starts with Veer and Chhavi hiding inside a closet while the goon is about to open the door.

When the goons discuss that they need to figure out where Veer is so they can blackmail his father Sunil Thakur (MLA), Veer and Chaavi overhears this and get even more concerned.

Meanwhile, in the restaurant, Aparajita and Akshay start bickering with each other in which Akshay scolds Aparajita for not saving their daughters first.

Hearing this, Aparajita sarcastically remarks that she is a fool to save a husband who has returned to her life after fifteen years to which Akshay orders their guard to kill him so he will be saved from these taunts.

The guard then questions Aparajita and Akshay about how many kids they have and Aparjita replies three whereas Akshay replies five.

The guard gets confused after hearing this and questions Akshay if he has married two times and Akshay nods.

While Aparajita tells the guard that if he wants his daughter’s affection he needs to choose the right path, Akshay mutters that he has become a sandwich between Aparajita and Mohini.

Aparajita then remarks that she wants nothing to do with Akshay as he is sweet but Mohini appears as a snake.

On the other hand, while Disha is fighting with the goon in the kitchen, the goon kicks her on her knee, causing her to fall and wince in pain.

The goon then moves forward to attack Asha and Niya but Disha attacks him from behind.

In the meantime, Sunil Thakur denies withdrawing his ticket as he does not care about Akshay since he is not his relative.

Once he cuts the call, he finds Mohini and her brother in front of him and Mohini begs the MLA to save her husband.

Even after a lot of begging, Sunil rejects it and informs Mohini that his own son is also missing since the morning.

Meanwhile, entering the room, one of his teammates orders the guard to kill Aparajita and Akshay since Sunil Thakur has rejected to withdraw his ticket but surprisingly the guard hits him on his head.

After the goon falls unconscious, the guard frees Aparajita and Akshay as he feels grateful to Aparajita for the advice.

Elsewhere, Veer advises Chhavi to switch off her phone since the mob can hear the ringtone.

Once Veer is sure the goons are gone, he urges Chhavi to come out and Chhavi announces that she is leaving.

Angry Veer grabs Chhavi forcefully and orders her to break her Karvacahut fast which shocks Chhavi.

Softening his tone, Veer informs Chhavi that she is his lifeline and Chhavi hugs him.

Meanwhile, Aparajita and Akshay finally find their daughters, and spreading his arms, Akshay waits for Asha and Disha to hug like Niya but they run into Aprajita's arms.

Disha then reveals that Chhavi is out with Veer which shakes Akshay and Aparajita.

© Copyright tellybest.com, 2022, 2023. All Rights Reserved. Unauthorized use and/or duplication of any material from tellybest.com without written permission is strictly prohibited.
Cached Saved on: Tuesday 22nd of November 2022 11:33:24 PMCached Disp on: Tuesday 6th of December 2022 01:05:03 PM