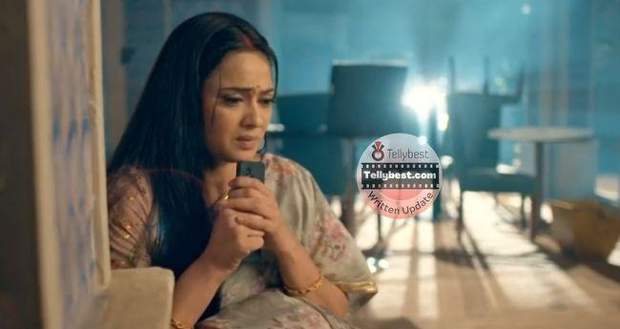 Today's Main Hoon Aparajita 23rd November 2022 episode starts with Aparajita, Akshay, and their daughters getting into a room to block the goons outside.

The goons continue to bang on the door of the room while Akshay holds it as the girls put things in front of the door to make it difficult to open.

Asha notices blood on Nia’s arm and asks if she is wounded anywhere to which Nia replies that the blood is not hers.

Nia notices Akshay’s arm bleeding and asks how he got wounded.

Aparajita takes a look at the wound and covers it with her saree after tearing it while Akshay stares at her with a feeling of realization.

Amma calls Aparajita and asks her if all of them are safe to which Aparajita replies that everyone is all right except Chhavi who is nowhere to be found.

Aparajita promises Amma that she will find out about Chhavi soon after which Amma asks about Akshay.

Akshay tells Amma that he is with Aparajita as she saved his life from the goons.

As the goons start to bang on the door aggressively, Aparajita shows a way to get out and asks the girls to start going one by one.

As the window is situated at a height, Akshay asks each of them to climb on his shoulder so that he can lift them.

Disha goes first but hesitates to climb on Akshay’s shoulder. With Aparajita’s final push, Disha gets out of the room.

Nia goes next followed by Asha with Akshay assuring them that he will not drop them.

Meanwhile, some goons keep tabs on Veer and Chhavi as they hug each other and videotape them to send the MLA.

The MLA gets anxious about seeing the goons on Veer and agrees to follow their demands to save his son’s life.

Manish and Mohini spot Chhavi with Veer and wonder what she is doing with him.

Chhavi and Veer complete the rituals of Karvachauth and Chhavi gets her phone back to call Aparajita.

Aparajita climbs to the window with the support of Akshay and sees the moon and Akshay’s face simultaneously.

After Aparajita gets out, Akshay tries climbing but his injured arm starts paining while the goons push their way into the room.

© Copyright tellybest.com, 2022, 2023. All Rights Reserved. Unauthorized use and/or duplication of any material from tellybest.com without written permission is strictly prohibited.
Cached Saved on: Wednesday 23rd of November 2022 11:26:55 PMCached Disp on: Saturday 10th of December 2022 02:34:59 PM