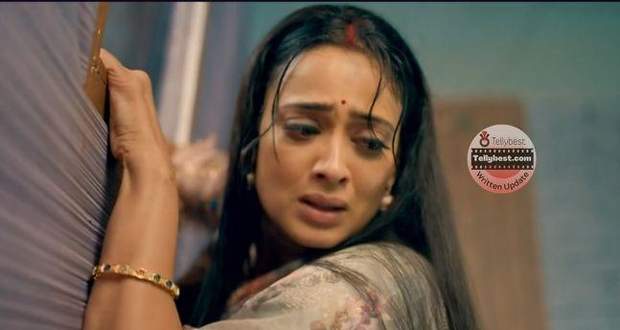 Today's Main Hoon Aparajita 25th November 2022 episode starts with the goons dragging Chhavi with them and trying to drop her from the roof of the building.

Veer screams at the goons and tries to stop them from taking away Chhavi but the goons start to beat him.

Aparajita and Akshay hear Chhavi’s scream and start climbing the stairs to go to the rooftop as soon as possible.

As the goon reaches the edge of the roof, Aparajita and Akshay reach the rooftop and Aparajita throws a glass bottle at the goon.

The goon falls down after getting hit while Chhavi somehow retains her balance and falls to her knees.

Aparajita hugs Chhavi in her arms while Akshay fights with the other goons to teach them a lesson.

As Akshay releases Veer from the ropes, he also fights with the goons and saves Akshay from getting attacked from behind.

Akshay falls to the ground after getting hit on his arm while Veer tackles all the goons by himself to ensure no one goes near Chhavi and Aparajita.

Aparajita throws a log of wood at a goon who is proceeding toward Akshay which Mohini and Manish see.

Mohini comes to Akshay and shows her concern for him while the police come and arrest all the goons.

Veer hugs Chhavi tightly in his arms and thanks God for keeping her safe and unharmed.

With everyone present, Veer says that he loves Chhavi more than anything and would have died if something happened to her.

The MLA gets infuriated while Akshay compliments Veer’s bravery.

Before leaving, Aparajita witnesses Veer throwing off a goon from the cliff of the building in anger and gets traumatized.

Later, the media gets to know about Akshay and Aparajita’s joint venture and interviews them together.

Akshay asks Aparajita to give him a chance to become a part of his daughters' lives while Aparajita remains silent.

© Copyright tellybest.com, 2022, 2023. All Rights Reserved. Unauthorized use and/or duplication of any material from tellybest.com without written permission is strictly prohibited.
Cached Saved on: Saturday 26th of November 2022 12:02:02 AMCached Disp on: Saturday 10th of December 2022 02:45:53 PM