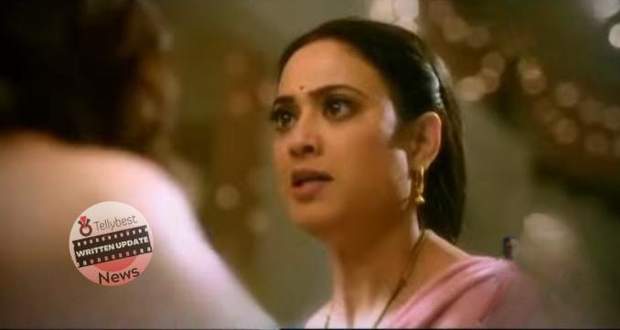 She even accuses Aparajita’s daughters of being attention seekers while Aparajita clenches her fist in anger.

Before Mohini can talk more trash about Aparajita’s daughters, Aparajita slaps her hard.

Akshay arrives at the same time and orders Aparajita to leave as she has crossed all her limits.

Mohini however grabs his arm and announces that they need to maintain their class.

Turning toward the guests, Mohini urges them to leave in a pleading voice.

While the guests leave, Aparajita urges her mother-in-law to go to the room with her daughters.

She also puts her hands on Chhavi’s cheeks and tells her that she knows Chhavi cannot lie.

After everyone walks away, Mohini starts accusing Chhavi of provoking the boy first while Akshay questions Aparajita about what happened to Chhavi.

Mohini tries to distract Akshay by announcing that Chhavi does not know her limits while Aparajita yells that she pities Mohini’s daughter.

Aparajita further adds that Akshay cannot see the pain of Chhavi but Akshay looks at her with shock.

Meanwhile, Mohini gaslights Aparajita’s anger by announcing that Aasha is drunk so Aparajita should teach her daughters some good morals.

She even shows Akshay a picture of Chhavi laughing and Akshay believes her.

Turning toward Aparajita, Akshay accuses her of being too proud to accept that maybe Chhavi is at fault.

Aparajita gets hurt by Akshay’s words and announces that he can trust Mohini but not his own daughter.

On the other hand, Aparajita’s mother-in-law curses Mohini for ruining her precious grand-daughters night.

Meanwhile, Aparajita decides to call the police to get justice for Chhavi but Mohini cuts the wire.

Mohini then accuses Aparajita's daughters of provoking the boy and Disha arrives there at the same time.

Afterward, the police arrive there and tell Aparajita that the complaint is again registered against Disha.

Looking at the police, Aparajita blames Akshay for calling the police while he looks oblivious.

Mohini remarks that her friend can take the case back but she cannot guarantee Disha will not become a murderer in the future.

Aparajita yells at Mohini but Akshay slides with Mohini and urges the police to follow the necessary steps.

Even the police praise Akshay for not being blind by his love for his daughters.

Later, the police order Disha to wait as they will arrest her in the morning.

Aparajita accuses Akshay of ruining Disha’s life but he ignores her.

After the police walk away, Akshay starts dragging Disha to his room.

© Copyright tellybest.com, 2022, 2023. All Rights Reserved. Unauthorized use and/or duplication of any material from tellybest.com without written permission is strictly prohibited.
Cached Saved on: Monday 21st of November 2022 07:12:26 PMCached Disp on: Wednesday 7th of December 2022 04:24:34 PM