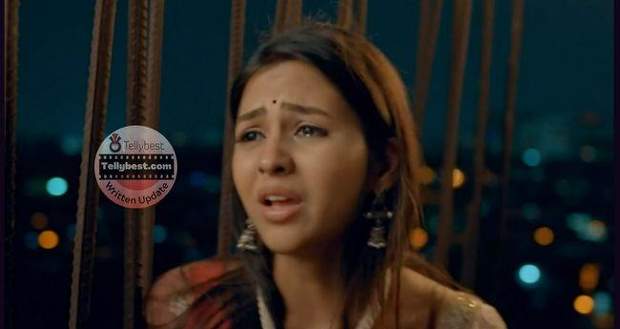 Today's Main Hoon Aparajita 26th November 2022 episode starts with Akshay asking whether he can have a chance to be a good father to which Aprajeeta says that she is their mother and she can not answer for her daughters as it is her daughters' sole right.

Aprajeeta tells him that she can open the door for him but their daughters will decide whether they want him or not.

Mohini tries to instigate Akshay saying that Aprajeeta is a thankless lady but Akshay vows to win over his daughters with love.

Meanwhile, Aparajeeta who is leaving with Chaavi thinks about Veer and his proposal to Chhavi.

Chavi gets a call from Veer and Aprajeeta watches it.

On the other hand, MLA scolds Veer and asks him to stay away from Chhavi.

Later, Akshay again comes to talk to Aparajeeta in the car while Chhavi constantly gets calls and messages from Veer.

She tells Akshay to talk later and leaves from there.

On the other hand, Asha and Disha tell Amma how Akshay broke Aprajeeta's fast by mistake but Amma says that it is supreme power working.

After some time, Chavi and Aprajeeta and Mohini and Akshay reach home and are welcomed by society.

A neighbour praises Aparajeeta that she inspired all the ladies out there.

However, Aprajeeta gives credit to Akshay while Amma gives food to her so that after fighting with the goons, she does not fight with food and the toil in the kitchen.

Nia thanks Aparajeeta and irritated Mohini takes her and Akshay inside.

Inside Aprajeeta's house, Aprajeeta removes the evil from her daughters with red chillies and cries worrying for them.

She shares with Asha, Disha and Chavi how scared she was for them and was very happy when they fought for themselves.

Chavi, Asha and Disha encourage Aprajeeta while she thinks that she has to talk to Chavi regarding Veer after seeing his rash behaviour.

Just then, Akshay comes and asks Aparajeeta to talk.

Akshay says that he liked how they as a couple fought together and saved their daughters.

He says that he wants to talk about Veer and Chavi and suggests their marriage but Aparajeeta has the continuous reel running in her head where Veer was madly confessing his love for Chavi.

Aparajeeta says she will not let Chavi make the same mistake that she made.

She tries to tell Akshay that Chavi and Veer need to understand each other better to come to the decision of marriage.

© Copyright tellybest.com, 2022, 2023. All Rights Reserved. Unauthorized use and/or duplication of any material from tellybest.com without written permission is strictly prohibited.
Cached Saved on: Saturday 26th of November 2022 11:28:54 PMCached Disp on: Wednesday 7th of December 2022 03:44:51 PM