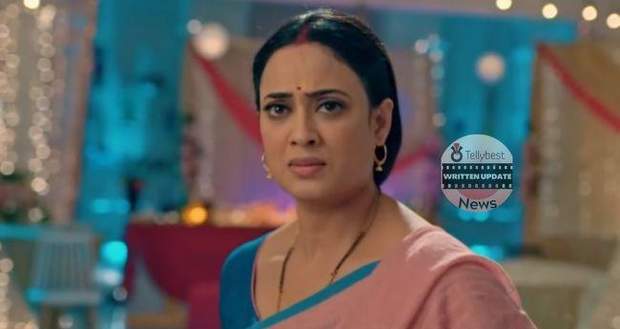 Today's Main Hoon Aparajita 27th October 2022 episode starts with Aparajita observing Asha who is laying on the bed and remembers what Mohini told her.

Aparajita then wakes her up and says that they're leaving the house which makes Asha jumps out of her bed.

Aparajita instructs Asha that they can't just stay here after what transpired.

Meanwhile, Chavi is packing their suitcases. Disha sees her and puts her foot down to say she will not let Akshay and Mohini have their way and force them to leave their home.

Chavi requests Disha not to take any action because it will only make the situation worse.

Aparajita arrives in their room after hearing all of this and packs their belongings.

Disha goes on to ask Aparajita whether they are going to flee their home without even fighting for it.

Aparajita asserts they call it home because they feel safe there, and she wonders if they feel at ease there.

Disha shifts her gaze and does not respond to her question.

Aparajita persuades Disha that wherever all four of them are, this is where their home is.

Hearing this, the girls hug Aparajita.

On the other hand, Akshay glumly tells Mohini that he sincerely hopes what she is stating is accurate.

Mohini inquires with Akshay whether he seriously thinks she is making it up.

Mohini then goes on to convince Akshay that she wasn't deceiving him and inquires about what is bothering him.

Akshay responds with Chavi's name and claims that he has lost Chavi's love and admiration.

Chavi is upset, according to Mohini, but she still adores Akshay more than Aparajita, so she will accept him back.

Akshay requests that she obtain the village house records to persuade Aparajita to accept the residence for the children.

In the meantime, Amma is looking for her blouse. She sees Aparajita and asks her for assistance in packing her belongings.

Aparajita wipes her tears and informs Amma about the capsules she must consume every day because she won't be here from now on to remind her.

Amma reprimands her and declares that she will leave the house with them.

Aparajita advises her not to travel with them in this condition.

Aparajita, in anguish, says Amma became her mother and that she never expected to leave this house before her death.

However, now with everything that has happened, she can't stay here and Amma can't move with them at this difficult time in this state, but she assures her that she will return.

Aparajita, Chavi, Disha, and Asha leave with their suitcases and reminisce about their wonderful times in the house.

Seeing this, Akshay requests that Aparajita accept the village house for children.

Aparajita tells him not to bother about the kids because she has been caring for them for 15 years without his help and intends to continue to do so.

Mohini pulls at Aparajita's mangalsutra and inquires regarding its purpose.

Aparajita says she can break it, but people still refer to Aparajita as Akshay's wife, this house's daughter-in-law, and Mohini as a housebreaker.

Aparajita's mangalsutra is then snatched by Mohini but Aparajita retorts by saying that Amma used to say that life isn't identical every time, and Lord Sriram went to exile and returned to his empire, and in the same way, she will too.

Mohini shuts the main door in their faces and leaves them out in the rain.

© Copyright tellybest.com, 2022, 2023. All Rights Reserved. Unauthorized use and/or duplication of any material from tellybest.com without written permission is strictly prohibited.
Cached Saved on: Monday 21st of November 2022 08:18:27 AMCached Disp on: Tuesday 29th of November 2022 12:31:11 AM