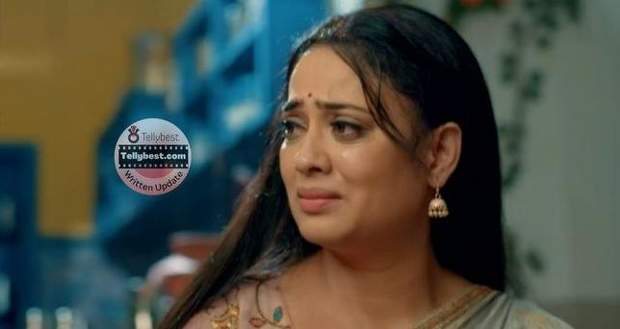 Today's Main Hoon Aparajita 28th November 2022 episode starts with Akshay trying to convince Mohini so that she breaks her fast by eating food and water.

However, Mohini continues to sulk at Akshay and says that he does not care for her anymore.

Akshay sits beside Mohini and takes out a pair of diamond earrings saying that he planned to gift them to her on Karvachauth.

Mohini looks frazzled on seeing the earrings and takes them instantly without any complaint.

Akshay tells Mohini that whatever happened was because of the situation and asks her to eat something quickly.

Mohini determines that she will take revenge on Aparajita for trying to steal her husband using her daughters.

Later at night Chhavi talks to Veer and tell him that she is not ready to answer his question about marriage.

However, Veer tells Chhavi that he is impatient and will not wait for her for so much time.

Meanwhile, Aparajita tells Amma about the unusual behavior she saw in Veer but Amma does not catch her point.

The next day, Chhavi thanks Disha for hiding that Chhavi has Veer’s name on her hands from Aparajita.

Disha says that she will not hide it for long and asks Chhavi to tell Aparajita by herself.

At the same time, the MLA asks Manish to control Chhavi after showing him the video of her and Veer kissing.

Mohini watches the video and says that she will not let this opportunity slip from her hand.

Akshay comes to give some clothes he bought for the three of them but Disha mocks him and leaves.

Chhavi accepts the gifts and thanks Akshay while he asks her to come aside with him as he has some talk to do.

Akshay asks Chhavi if she loves Veer to which Chhavi replies with a yes.

However, Chhavi makes it clear that she was not ready to answer Veer’s marriage proposal the earlier day.

Akshay tells Chhavi to relax and tell him about her true feelings without thinking about him or her mother.

Chhavi hugs Akshay as she hears that he will support her in her decision while Aparajita catches them conversing with each other.

After Chhavi leaves, Aparajita asks Akshay not to spoil Chhavi as marriage is an important decision in one’s life.

Later, Disha asks Aparajita whether she has forgiven Akshay for what he did to her.

Aparajita replies that whatever there is between her and Akshay should not spoil their relationship with him.

Suddenly, Aparajita and Disha receive a message and get shocked to see the video of Veer kissing Chhavi.

Mohini sees everyone in the neighborhood staring at their phones watching Chhavi’s video and smirks in satisfaction.

Chhavi enters the house while everyone stares at her with wide eyes.

© Copyright tellybest.com, 2022, 2023. All Rights Reserved. Unauthorized use and/or duplication of any material from tellybest.com without written permission is strictly prohibited.
Cached Saved on: Wednesday 25th of January 2023 08:42:24 PMCached Disp on: Thursday 2nd of February 2023 08:19:10 PM