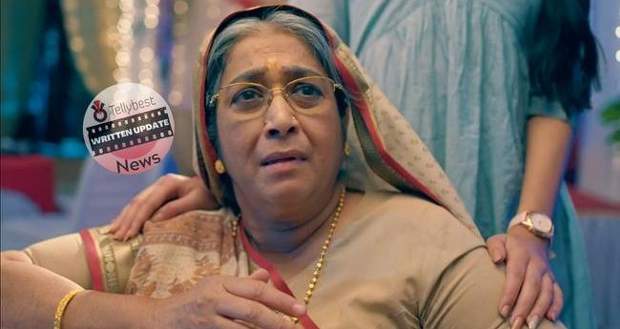 Later, Amma Ji insults Akshay for kicking his own kids from their house while he sits on the threshold gloomily.

On the other hand, Aparajita and her daughters go to their laundry store but the lock is changed.

Aparajita calls the rent owners while they get drenched in the rain.

A lady picks up the call and Aparajita informs her about the changed lock.

However, the lady insults Aparajita for not paying her rent on time and demands 2 months of advance rent from her to open the store again.

Meanwhile, Aparajita confronts the landlady and Disha snatches the phone and accuses the lady of doing this because of Mohini's influence.

The lady cuts the call and Aparajita looks at her store with teary eyes.

She calls her friend who lives on the first floor across the road but she does not come.

Later, Aparajita takes her daughters to a dhaba while the rain stops.

A man eyes Aparajita and her daughter who are eating in the car.

In Akshay’s house, Mohini thanks her brother for bribing Aparajita’s landlady and closing her laundry store.

In the dhaba, Chavi finds the keys to the village house in her bag which Akshay offered her before.

However, Chavi refused to accept the keys without asking Aparajita so he put them in her bag sneakily.

At the same time, Aparajita sees a group of men looking at her daughters creepily and hurriedly goes into the driver's seat.

She tries to start the engine but it doesn't start so she and Disha go out of the car to check the engine while the men walk towards their car.

Aparajita orders her daughters to not get out of the car while the men offer their assistance to her.

Suddenly a man dashes towards Aparajita but she slams the car door in his face.

Aparajita beats the man with a thick stick while Chavi grabs one man's hair.

Disha punches another man while Asha sprays pepper spray in one of the man's eyes.

The whole family fights against the goons while Chavi’s bag drops on the road.

At the same time, the police sirens are heard and the goons run away.

Afterwards, Asha and Disha go to take shelter from the rain while Chavi searches for the key fervently in the puddles.

Aparajita drags Chavi beneath the roof and asks her what was she searching for.

Chavi tells about the village keys to her while Disha blames Akshay for making this night dark for them.

However, Aparajita encourages her daughters to be brave as God is taking an exam of them.

She wraps a large polythene on her daughter's and gets inside it herself.

© Copyright tellybest.com, 2022, 2023. All Rights Reserved. Unauthorized use and/or duplication of any material from tellybest.com without written permission is strictly prohibited.
Cached Saved on: Monday 21st of November 2022 08:32:34 AMCached Disp on: Thursday 1st of December 2022 12:48:20 PM