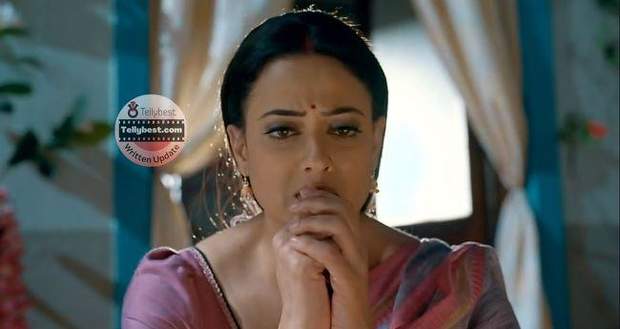 Today's Main Hoon Aparajita 29th November 2022 episode starts with Chhavi asking everyone what the matter is while Aparajita continues to cry.

Disha shows the video to Chhavi which makes her stunned with horror creeping up her heart.

Chhavi looks at Aparajita and says that the video is not what it looks like and she has not done anything wrong.

Disha asks Chhavi to stop lying and shows the name of Veer on her hand which shocks Aparajita more.

Chhavi says that she and Veer met with each other for Karvachauth but she had no idea that Veer has organized the celebration in his house.

Aparajita asks Chhavi to tell her what exactly happened to which Chhavi replies that she did not cross her line with Veer.

After a point, Chhavi stopped Veer from coming close to her as she has promised Aparajita not to get intimate.

Aparajita says that Chhavi has lied to her numerous times but she is still believing in her words as she loves her immensely.

Chhavi shares a hug with Aparajita and thanks her for believing in her despite such a video going viral.

Suddenly, the calling bell goes off and Aparajita asks her daughters to go inside while she handles whoever has come.

Aparajita opens the door and sees their neighbors coming in with the video and asking what will happen to Chhavi now.

Aparajita urges all of them not to share the video further and makes it clear that the video is not what it looks like.

After the neighbors leave, Aparajita gets the number of cyber security and decides to lodge a complaint against whoever that made the video viral.

Meanwhile, Akshay goes to the MLA’s house and pounces on Veer while he was already getting beaten up by his father.

Veer tries to assure Akshay that he and Chhavi did not do anything wrong and that video is not showing the truth.

Akshay slaps Veer in anger and screams that the girl in the video is his daughter.

Veer tells Akshay that Chhavi will never cross her limits and he has to believe in them as they want to live with each other for the rest of their lives.

Aparajita swears to make Chhavi see the real face of Veer which is far different from what everyone sees in daily life.

For that, Aparajita tells Disha that they have to take Chhavi away from Veer.

© Copyright tellybest.com, 2022, 2023. All Rights Reserved. Unauthorized use and/or duplication of any material from tellybest.com without written permission is strictly prohibited.
Cached Saved on: Wednesday 25th of January 2023 05:19:44 PMCached Disp on: Thursday 2nd of February 2023 08:08:33 PM