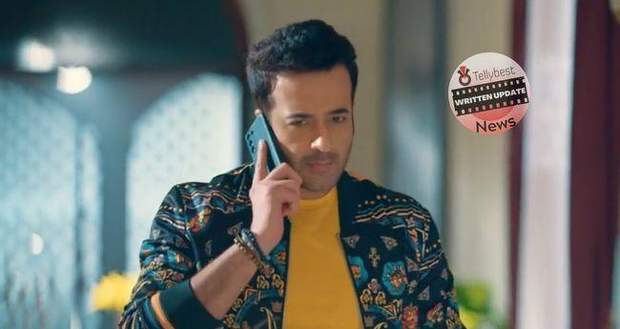 Today's Main Hoon Aparajita 2nd November 2022 episode starts with the neighborhood ladies arriving at Mohini’s house with their daughters for the Kanya Puja.

Akshay comes and gets to know that Mohini is already aware of Aparajita and her daughters living in the nearby house.

As Akshay notices the girls roaming around, He asks Mohini about the occasion and approves of her idea of doing the Kanya Puja.

Mohini tells Akshay that she has shifted Amma to the second floor which initially angers Akshay but he calms down when Mohini explains that she did it so that Aparajita cannot contact Amma.

After Akshay leaves, Mohini greets the parents and says that she will fulfill her promise of giving each of them a gold coin.

Meanwhile, Disha and Ashu get furious on seeing that no one is ready to come to their house as Mohini has lured them through a gold coin.

Aparajita tells Disha and Ashu that worship is not something to be done by force and requires faith in one’s heart.

On Aparajita’s command, Disha and Ashu start the preparations for the puja in the hope that little girls will arrive there.

Chhavi arrives with a bunch of poor girls and asks Aparajita if they can do Kanya Puja with them to which Aparajita welcomes the children with a smile.

At the same time, Mohini scolds the children for jumping on her sofa and for asking questions about Aparajita in front of her.

Mohini’s servant gives pizzas to the children which they refuse to eat making Mohini mad.

As Mohini starts speaking impolitely to the kids, they get up and leave for Aparajita’s house.

The neighborhood kids enter Aparajita’s house with happy screams and ask her to feed them halwa puri.

Aparajita gladly welcomes them, but Mohini comes in and says she will return to Aparajita later.

Aparajita tells Mohini about taking some food for Amma to which Mohini replies that she has shifted Amma to the second floor.

Later, Aparajita comes to Amma by climbing a ladder while Disha holds it from below.

Aparajita gives Amma the halwa puri and a new phone but forgets the charger of the phone.

Disha calls Chhavi and asks her to bring the charger while Ashu keeps her eyes on Mohini.

While Chhavi searches for the charger, Mohini starts going upstairs and Ashu warns Aparajita to climb down before Mohini comes there.

© Copyright tellybest.com, 2022, 2023. All Rights Reserved. Unauthorized use and/or duplication of any material from tellybest.com without written permission is strictly prohibited.
Cached Saved on: Monday 21st of November 2022 12:48:41 AMCached Disp on: Wednesday 7th of December 2022 11:35:32 AM