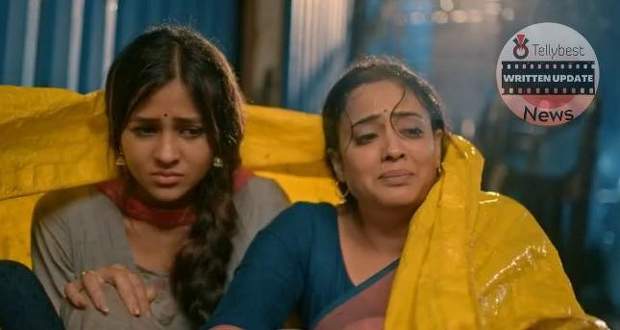 She also asks him to inform Dadi about them while being careful of Mohini.

Later, she tells her daughters that it is a very auspicious day for them to start their new life and she will also perform Kanya Pooja too as it is their ritual.

Meanwhile, Dadi asks for her phone which Damini has confiscated so that she cannot talk to Aprajita.

In the meantime, Guggu comes to the house disguised as a worker and tells Dadi about Aprajita and then picks up their photos and goes away.

Meanwhile, Aprajita and her daughters are busy decorating the house.

Just then, Guggu comes running to Aprajita and tells her that he has given her message to Dadi but she will not be able to tell her anything now as Mohini has taken Dadi’s phone and has thrown away all the furniture in the house.

Aprajita tells her to not worry because Mohini can only change the surface but not their fate.

In the meantime, Dadi is crying with pain because there is too much chilli in the food.

Akshay comes to her and tells Mohini to prepare something fresh because Amma will not be able to bear it.

Dadi recalls happily how she has added chilly to her food herself.

However, Mohini immediately understands Dadi’s trick and tells her to never play the trick again or else she will definitely add something to her food and then Aprajita will not be able to soothe her.

Later, Aprajita is getting ready and is putting on the Sindoor when her inner self berates her as there is meaning to it.

Afterwards, Asha is unpacking the bag when she sees something in the bag and compliments Disha for her wickedness.

At the house, Mohini is trying to switch on the AC but couldn’t find the batteries anywhere because Disha has taken them all with her.

Meanwhile, Aprajita is watching the house when Chavi brings her tea and asks whether they will ever go to their house again.

Aprajita tells her that she has vowed to get the house back and she will and it is a promise that she has made herself.

After a while, Akshay finds out about Aprajita’s car in the garage and wonders if she is somewhere nearby.

Mohini tells him that it should not concern her when Akshay tells her that he is worried about his daughters.

Akshay asks Manish to tell him all the details about Aprajita’s car when Dadi comes to him and tells him to leave Aprajita alone now that he has successfully thrown her and her daughters out of the house.

Akshay gets angry at Dadi calling him a bad father and tells her that he is equally concerned about his daughters.

Meanwhile, Mohini gossips about Dadi and Akshay while making plans for lunch and trips wearing her sandals which are broken.

© Copyright tellybest.com, 2022, 2023. All Rights Reserved. Unauthorized use and/or duplication of any material from tellybest.com without written permission is strictly prohibited.
Cached Saved on: Monday 21st of November 2022 06:16:01 AMCached Disp on: Tuesday 29th of November 2022 12:23:22 AM