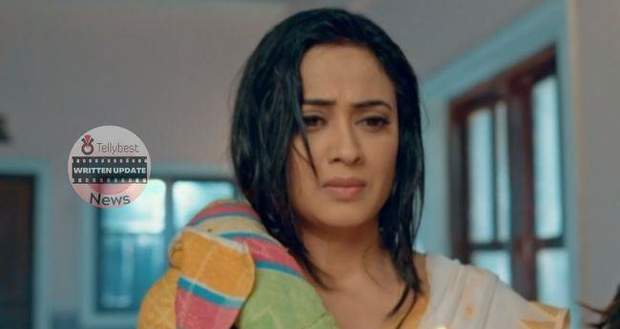 Today's Main Hoon Aparajita 31st October 2022 episode starts with the chunri on Shivaji’s idol flying on Aparajita and covering her face while Mohini sits in her car and drives away.

At the same time, Akshay sees Aparajita and asks her where are his daughters.

Furious Aparajita berates Akshay for asking about the daughters whom he left on the road late at night.

She tells him they are living in the laundromat while Akshay accuses her of doing this intentionally to embarrass him.

Ignoring him, Aparajita walks away after gathering her belongings as she needs to do Kanya pooja.

However, Akshay screams at her not to forget he is still her husband.

Aparajita stops midway and walks back to Akshay and reminds him that their relationship finished some years ago.

She continues by saying that the scraps of their relationship washed off yesterday when he left them in the rain.

However, Akshay insults Aparajita for living in the 3rd-grade laundromat intentionally so she can embarrass him in society.

Akshay being a misogynist says girls need to safeguard their dignity but Aparajita says her daughters need to be saved from their own families.

On the other hand, Disha and Chavi go to fill water from the common tap in the society.

The aunties gossip about them and mock them as Akshay kicked them out in the middle of the night.

However, Disha's temper rises and she bangs the jug with a bucket and announces that they have left her home.

She gives her condolences to everyone as they missed the opportunity to enjoy the show of Akshay kicking them out.

Disha sarcastically tells them to write their questions on a piece of paper so she can answer them personally.

Chavi smiles at Disha’a actions and they go fill their buckets.

On the road, Mohini gets out of the broken car and scolds her driver for getting her late.

In the society, Disha goes to the garage and a child gives a letter to Chavi and she recognizes the letter from Veer.

The letter says that Veer misses her and wants to meet her personally to hear her beautiful voice.

At the same time, Veer walks into the washing area and helps a lady pick up her bucket while maintaining eye contact with Chavi.

On the road, Mohini walks on the road with a broken slipper and curses Aparajita’s daughter.

She gets a call from Akshay and enters the society washing area.

However, Mohini crashes with Veer but ignores him as she is looking at her phone while Chavi goes home.

Later, in her home, Mohini inquires from her brother about Aparajita’s whereabouts.

When Mohini’s brother tells Aparajita’s car getting repaired nearby, Mohini challenges him that Aparajita will never dare to roam near her house again.

Mohini walks out on the road while Disha drives the car beside Mohini and splashes muddy water on her dress.

© Copyright tellybest.com, 2022, 2023. All Rights Reserved. Unauthorized use and/or duplication of any material from tellybest.com without written permission is strictly prohibited.
Cached Saved on: Monday 21st of November 2022 06:53:34 AMCached Disp on: Tuesday 29th of November 2022 12:34:19 AM