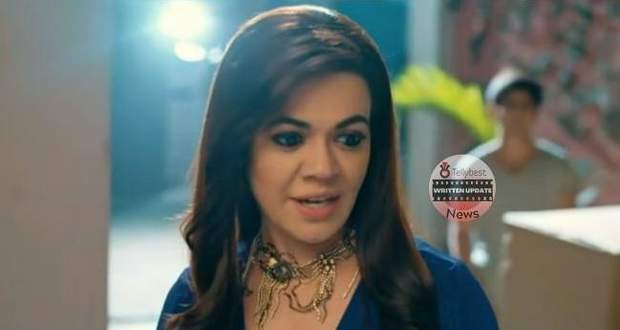 Today's Main Hoon Aparajita 5th November 2022 episode starts with Aparajita tending to Disha's injury, unknown to them a snake has slithered below their bed.

On the other hand, Akshay and Mohini are seen to be vigorously engaged in arguing when suddenly Nia enters.

Akshay reveals to Mohini that he already knew about Nia's visit, but doesn't answer when Nia asks about their reason for argument.

Nia also tells them all about meeting Aparaita and her helping her out to buy earrings.

Suddenly the snake charmer calls up Mohini to pay him the rest of the money when Aparajita comes there and drags her to their house.

Mohini threatens Aparajita saying that there may be a day when she won't be able to protect her daughters anymore.

The snake which has slithered towards Mohini stings her and Mohini bandage the wound until the ambulance arrives.

Aparajita tries to keep Mohini conscious when Mohini suggests that she should slap her to keep her awake.

Akshay stops Aparajita from hitting Mohini any further only to later realize the reason Aparajita was doing so. Akshay is baffled and asks Aparajita to call the ambulance while he tries to keep her awake.

Aparajita tells him that she has already done those things but water has been unhelpful in keeping Mohini awake.

Aparajita then burns a piece of coal and tries to burn off the infected area. Akshay again stops her and asks her not to do that.

Mohini says that her mother has said that doing so would stop the poison from spreading.

Akshay asserts that he doesn't believe in such backward treatment options and wants to wait for the ambulance.

Mohini then asks her to let her burn the area, as when the poison spreads, she would be rendered paralyzed by the viper's bite.

Akshay is surprised to learn that Mohini knows the species of the snake and asks Mohini about it.

Mohini responds by saying that she is the one who released the viper in the laundry, which shocks Aparajita.

Hearing this Aasha lets go of Mohini and Nia catches hold of her.

Aparajita forgets everything and still puts the burning piece of coal on her, till the ambulance arrives.

Nia thanks Aparajita for saving Mohini, while Aprajita is still reeling from Mohini's revelation.

Later that evening, Akshay scolds Mohini for letting the snake lose in the laundry.

Before, Akshay could say anything further Nia asks Mohini the reason for doing this.

Akshay then reveals that Aparajita is his ex-wife and her daughters are Nia's sisters.

On the other hand, Nia questions Akshay and tells Akshay and Mohini that she will meet her step-sisters and she leaves.