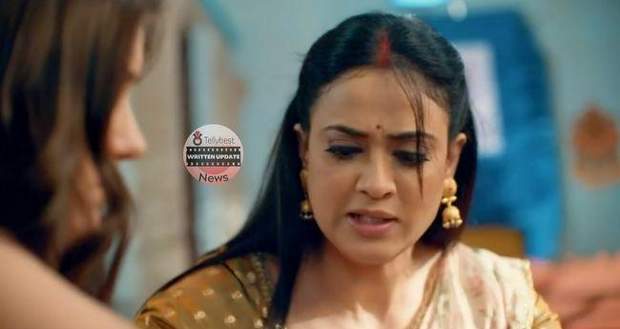 Today's Main Hoon Aparajita 6th November 2022 episode starts with Chhavi and Disha thinking about Asha’s statement about Nia being older than her and realizing that Akshay had Nia with Mohini while he was still married to Aparajita.

Aparajita notices the gloomy faces of her daughters and calls Asha to have a milkshake together.

After Asha comes, Aparajita explains to them that nothing has changed even after Nia has arrived in their lives.

Chhavi tells Aparajita that seeing Nia reminds them about the things they have lost.

Aparajita explains to them that whatever they went through in their lives was not Nia’s fault and she is also in a similar situation.

Asking them to forget about unnecessary things, Aparajita sits and shares the milkshake with her daughters from one glass.

Nia spots them from her terrace and gets happy to see such warmness between them which seems to be absent from her life.

Amma tells Akshay to not care about Mohini as she tried to kill Aparajita and his daughters through the snake.

Akshay tells Amma that he is also very angry with Mohini when Mohini’s brother arrives at the house to live for a few days.

As Akshay asks him about the party night, Mohini’s brother refuses to know anything.

Mohini meets with her brother and gets to know about Akshay being upset with her due to her tricks.

Mohini decides to use Aparajita's daughters against her so that she and Akshay can never mend their relationship.

Meanwhile, Chhavi comes out after receiving a call and sees all the belongings that Mohini sold to the garbage dealer.

Veer appears and surprises Chhavi by bringing back her family’s belongings while Chhavi panics about Aparajita spotting him there.

Veer tells Chhavi that he has never done something like that for a girl and she is special to him.

While holding Chhavi’s hands, Veer proceeds to kiss her while Aparajita comes there and asks Chhavi what is going on.

Chhavi realizes that Veer has left and acts as if she does not know anything about the things coming there.

Disha and Asha find 40 thousand rupees inside the piggy bank in those things and thank their well-wisher.

Later, Chhavi calls Veer and thanks him for returning those things but does not seem happy about him giving money to them.

Aparajita hears Chhavi silently talking to someone from the outside and wonders what the matter is.

© Copyright tellybest.com, 2022, 2023. All Rights Reserved. Unauthorized use and/or duplication of any material from tellybest.com without written permission is strictly prohibited.
Cached Saved on: Monday 21st of November 2022 06:43:12 AMCached Disp on: Thursday 1st of December 2022 11:43:17 AM