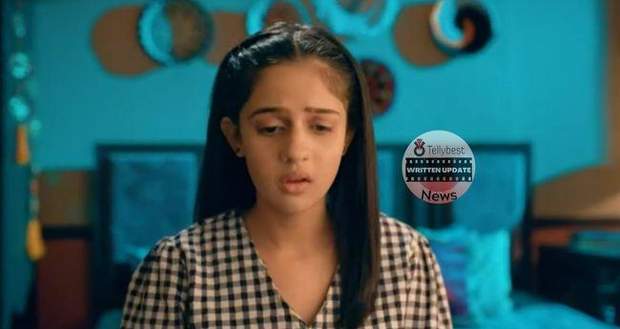 Today's Main Hoon Aparajita 7th November 2022 episode starts with Aparajita wondering whom Chhavi is talking with inside the bathroom.

Chhavi comes out and acts oblivious which makes Aparajita sure that something is going on with her.

The next day, Nia comes to Amma to know where Aparajita’s daughters study at.

Amma refuses to disclose the information at first but then tells Nia as she expresses her harmless intentions.

Even though Amma does not express anything on her face but she feels good to see that Mohini’s daughter is not like her.

Nia tells Mohini and Akshay that she wants to invite her stepsisters to the house to which Mohini gets furious.

However, Akshay asks Nia to do whatever she wants and gives her the liberty to invite them even if Mohini does not like it.

Mohini tells Akshay that he is acting oversensitive over his daughters after Chhavi told him about the party incident that day.

Akshay replies to Mohini that he loves his daughters very much and has realized that they are important to him more than anyone else.

Akshay leaves while Mohini burns in envy thinking that Aparajita is succeeding in taking Akshay under her control using her daughters.

Later, as Chhavi texts with Veer, her mobile falls to the ground, and Aparajita approaches to pick it up.

However, Chhavi hastily picks her phone up leaving Aparajita a bit surprised as she does not act like that.

Later, Disha, Asha, and Chhavi leave for college but Chhavi does not reach the college campus and instead goes to meet Veer.

Aparajita gets to know about Chhavi not reaching college later and gets worried after she does not pick up her phone.

Chhavi feels guilty after coming on a date with Veer while lying to her family and leaves midway.

Meanwhile, Aparajita calls Akshay and asks him where Chhavi is to which he answers that he does not know at all.

Akshay gets worried after hearing that Chhavi is nowhere to be found after she left home for college and leaves his meeting midway to find her.

© Copyright tellybest.com, 2022, 2023. All Rights Reserved. Unauthorized use and/or duplication of any material from tellybest.com without written permission is strictly prohibited.
Cached Saved on: Monday 21st of November 2022 07:35:55 AMCached Disp on: Thursday 1st of December 2022 02:59:04 AM