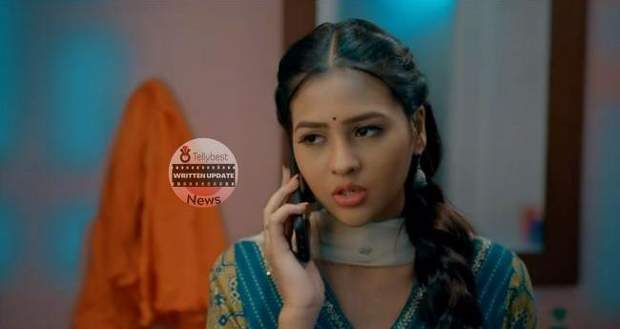 Today's Main Hoon Aparajita 8th November 2022 episode starts with Aparajita, Asha, and Disha getting worried about Chhavi’s whereabouts while she does not pick up her phone.

Disha says that Chhavi goes to the temple whenever she is worried and goes to search for her there.

Meanwhile, Chhavi comes out of the café in a hurry with Veer coming after her.

As Veer asks Chhavi why she left in such a hurry, Chhavi tells him how she saw the boy who tried to forcibly kiss her at the party.

Veer gets furious on hearing about the incident and asks Chhavi to identify the person after going back there.

However, Chhavi refuses to go back while Veer breaks the rearview mirror of a bike in anger.

Meanwhile, Nia comes to the laundry shop and bumps into Disha who asks her to go away.

In the middle of Disha and Nia’s argument, Chhavi returns and everyone comes outside to check on her.

Chhavi tells everyone about her getting bullied by her college mates and says that she went to the temple.

Disha and Asha console their sister with a hug while Aparajita suspects Chhavi’s statement.

Nia finds their hug very cute and joins them but the others do not acknowledge her.

Just then, Akshay comes there and asks Chhavi where she has been but Chhavi does not reply to his query.

Nia leaves with Akshay while Mohini comes downstairs after seeing them at Aparajita’s house.

Mohini tells Nia not to talk with Aparajita’s daughters but Nia refuses to listen to her.

Later at night, Aparajita decides to check on Chhavi’s phone but finds it locked with a password.

Aparajita talks with Amma and tells her about Chhavi’s unusual behavior which is making her upset.

The next day, Veer asks Chhavi to come and meet her as he has a surprise for her.

Chhavi agrees to meet him and asks Asha and Disha to leave for college earlier.

Aparajita notices that and decides to follow Chhavi as she needs to find out what Chhavi is hiding from her.

Aparajita follows Chhavi in a rickshaw but gets into a small accident while Chhavi gets off to meet Veer.

After coming into a gym building, Chhavi meets Veer who shows her the boy tied up who tried to kiss her.

Chhavi gets shocked to see that boy while Veer tells that boy that he has to receive punishment as he touched Chhavi.

Meanwhile, Aparajita searches for Chhavi around the neighborhood and finally enters the building after hearing Chhavi’s voice.

Veer asks Chhavi to beat up the boy with a stick to release her anger but she refuses to do so.

© Copyright tellybest.com, 2022, 2023. All Rights Reserved. Unauthorized use and/or duplication of any material from tellybest.com without written permission is strictly prohibited.
Cached Saved on: Monday 21st of November 2022 02:18:18 AMCached Disp on: Friday 9th of December 2022 04:22:43 AM