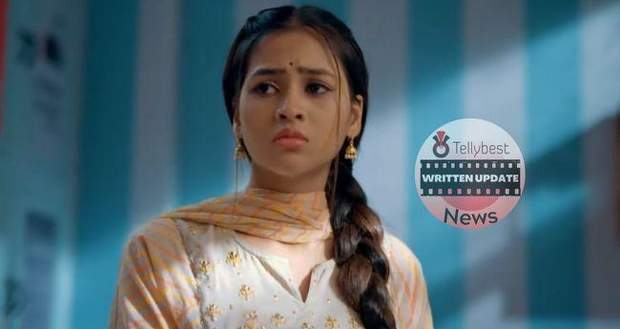 Chavi gets scared and stops telling him that he cannot do it anymore.

Afterwards, Veer beats the guy to a pulp for teasing Chhavi while Chavi feels loved and valued.

Meanwhile, Aprajita is searching for Chavi.

Later, Chavi stops Veer from killing the guy while Veer's friends arrive and take away the guy from there.

Meanwhile, Aprajita tries to enter the building but is stopped by the guard.

In the meantime, Veer tells Chavi that her love has changed him and he can give his life just to protect her.

He also asks Chavi to never leave him alone.

Afterwards, Chavi tells him that she will have to go now because she has to be at college.

Later, Veer tells her to face Aprajita and tell her the truth about their relationship but Chavi is scared of Aprajita’s anger.

Meanwhile, Aprajita calls her and hearing her ringtone finds her on the road.

Chavi requests Veer to not say anything to Aprajita.

Aprajita scolds Veer for following Chavi while Veer tells her that he is only here to apologise to Chavi and would have come to her afterwards.

He also tells Aprajita that he is the one who has sent her things and money to help them.

However, Aprajita is not impressed with his apology and tells Chavi to be weary of boys like him.

Elsewhere, Akshay recognises Veer in his house and tells Manish that they will not do business with people whose son has teased Chavi.

Manish insists on meeting him and tells him that he is the richest person in the city.

Just then MLA comes out and mocks Akshay for not being strong enough to control his wife.

Manish tries to appease MLA but he continues to tease him regarding his daughter.

Akshay gets instigated and threatens MLA of the power as a father of a girl who can burn him in flames.

On the other hand, Disha and Asha are discussing Aprajita’s birthday gift.

Meanwhile, Chavi is thinking about Veer when Aprajita comes to her asking about knowing Veer.

Chavi tries to tell Aprajita about Veer but Aprajita cuts her off telling her that she has full faith in her and knows that Chavi will never do anything without telling her.

However, Chavi gets pressured and resolves never to meet with Veer in future and blocks his number from her phone.

Later, Disha tells Asha that she will kidnap Dadi and bring her here forever as a gift to Aprajita.

The next morning, Aprajita wakes up to the best wishes and cakes from her daughters.

As Chavi offers to take their picture she sees Veer’s call and the bell rings as well.

© Copyright tellybest.com, 2022, 2023. All Rights Reserved. Unauthorized use and/or duplication of any material from tellybest.com without written permission is strictly prohibited.
Cached Saved on: Monday 21st of November 2022 06:28:44 AMCached Disp on: Thursday 1st of December 2022 03:20:52 AM