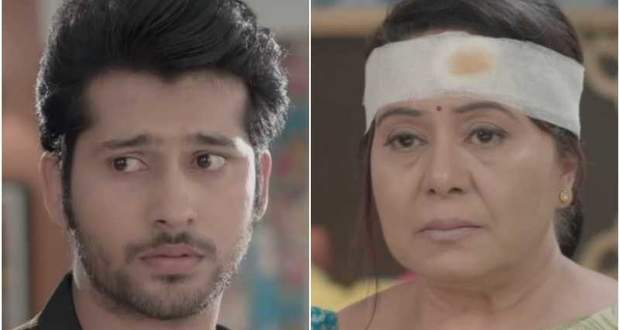 Today's Main Maike Chali Jaungi 20 Mar episode starts with Samar and Vicky coming to meet Jaya. Vicky asks Jaya if he could have a conversation with her. Jaya agrees.

Vicky asks Jaya if she will give a second chance to Samar if things fall in place. Jaya says it’s too late to settle differences with Samar.

Vicky says nothing gets late when a person decides to sort things out. Vicky blesses Jaya and walks away. Samar questions Jaya about what all he said to Jaya.

Jaya calls Samar’s name and asks him to stop. Jaya hands over the mangalsutra to Samar. Vicky asks Samar to come along.

Samar barges into Jaya’s house. He questions her how she could hand over the mangalsutra to him so easily.

Samar tells Jaya that he will never let her get married to any other guy. Satya tries to stop Samar. Samar lashes out on Satya and warns her not to utter a word.

Samar holds Jaya’s hand and starts forcing her to come with him to Surana house. Satya tries to stop but fails.

Vicky scolds Samar for forcing his love on Jaya. Vicky asks Samar to walk away. Samar states that he will never let Jaya’s wedding happen.

Vicky apologizes to Satya on behalf of Samar.

Vicky and Samar celebrate the success of their plan. Vicky says now Satya will believe him blindly. He also states that Jaya loves him truly.

Vicky plans that tomorrow Samar will have to kidnap Jaya from her Sangeet ceremony and take her somewhere away from the city.

Vicky says he is here along with Rama to save Jaya from Samar.

© Copyright tellybest.com, 2020, 2021. All Rights Reserved. Unauthorized use and/or duplication of any material from tellybest.com without written permission is strictly prohibited.
Cached Saved on: Monday 6th of December 2021 06:07:31 PM