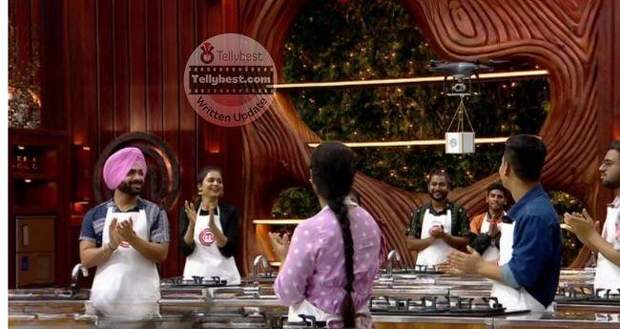 Today's Masterchef India 7 16th January 2023 episode starts with Nazia Sultana informing the chefs that she can't continue further in the Masterchef kitchen because her daughter's health is deteriorating day by day.

The chefs tell Nazia that she should go back to her daughter and the gates of MasterChef will always be open for her.

The chefs inform the contestants about Nazia's situation and then introduce them to the Masterchef immunity pin.

Garima tells the home cooks that they have to go through 2 challenges in order to win the immunity pin, for today they have to look at the envelope placed on their table.

Everyone finds the name of their own state written on the envelope which brings ease to their face, however, they are handed another envelope with the name of another country.

The task is to merge the two cuisines beautifully together in an hour.

Garima goes to Priyanka to ask her about her progress, Ranveer goes to Kamaldeep to inquire about her dish, and Kamaldeep tells him that she substituted refined flour with Maize flour

Gurkirat tells Vikaas that he is preparing Carrot pudding.

All the home cooks are hurrying in preparing their dishes while Aruna is using charlie to plate her dish in.

Vikaas asks the cooks to focus on the three Ps of the kitchen- Plan, Prep, and Plate

TIME TO TASTE THE DISHES

Priyanka presents her dish first in front of the chefs, she prepared Shundori Komola which is a Bengali song. Her cousins were Bengal-France.

Garima says that her presentation is spot on while Ranveer appreciates the depths of flavors in her dish.

Gurkirat is called next and has prepared Gajar Halwa Baklawa with Rice pudding sauce. His cuisine was Punjab-Turkey.

The chefs simply love his dish and say that he has done a very creative job.

The chefs call Suvarna next who has prepared Maharastra-USA Majha Pie in 4 layers.

The chefs love her dish and compliment her outlook on food and creativity.

Aruna comes in front of the chefs with her dish- tiffin tea, and her presentation is noted among all the 3 chefs.

Garima says that she did not fail to explore her idea of the dish, however, she should have used mustard butter as a spread, not a dip.

The chefs feel that these dishes need improvement and are not the young cook's best work.

Nayanjyoti comes in with his dish, he has prepared black sesame black forest cake. The chefs really enjoy his dish but feel that the presentation could be improved.

Santa brings her dish next, her dish is Korean-flavored sesame chicken with sticky rice and Kimchi Assamese salad.

The chefs note that her dish is too spicy but is also very tasty and they want to taste it again and again.

The chefs find her dish simply wonderful and say that she never fails to amaze them.

TIME TO ANNOUNCE THE TOP 8 DISHES THAT WILL TAKE PART IN THE IMMUNITY PIN CHALLENGE.

Aruna, Suvarna, Gurkirat, Nayanjyoti, Santa, Vineet, Priyanka, and Kamaldeep, win their position in the next round of competition for the immunity pin.

The chefs announce that the dish of the day was Suvarna's Majha pie.

© Copyright tellybest.com, 2022, 2023. All Rights Reserved. Unauthorized use and/or duplication of any material from tellybest.com without written permission is strictly prohibited.
Cached Saved on: Wednesday 25th of January 2023 08:45:44 AMCached Disp on: Wednesday 1st of February 2023 09:48:38 PM