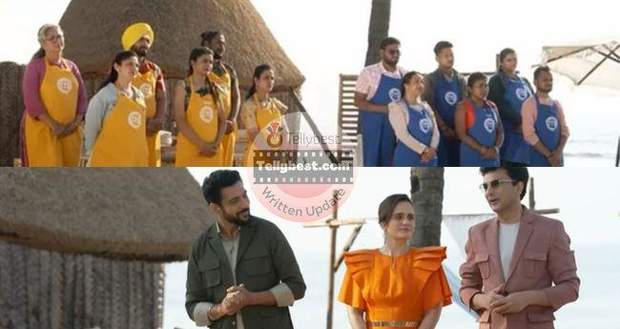 As the teams prepare the main course, Chef Edgardo notices something burning which turns out to be team blue's rice placed in a pressure cooker.

Priyanka gets scolded by the chef for being careless and not looking after the food as it can turn into a kitchen hazard.

With rice getting burned, team blue does not manage to put it on their plates and ends up their dish with a substitute element.

A short circuit takes place while using the mixer but no one gets hurt in the incident.

The judges feel that something is missing in team blue's fish after they taste it while team yellow succeeds in getting an advantage there.

With the last round of dessert left, both teams give their best and try to coordinate with each other to win that round.

Team yellow decides to make a tea cake with the use of olive oil and orange essence while team blue makes a dessert with the flavors of pistachio.

The judges like both desserts but one of them impresses them exclusively and decides the winner of that round.

Both teams are done with their three courses and gather for the results to be announced.

The judges thank Chef Edgardo Cruzet for his patience in mentoring and allowing the home cooks to use his kitchen.

Chef Garima announces that under each covered plate, there is the flag of the team who made the best food in that course.

The judges reveal the first Mediterranean course where team blue wins against team yellow by making a signature dish.

However, the tables turn soon after team yellow wins the main course challenge by cooking the perfect fish needed.

Both the teams get anxious as the judges reveal the last dessert course which turns out to be won by team yellow.

Gurkirat gets complimented by the judges for his cake recipe and gets the offer to add that recipe officially to that restaurant's menu.

Team Yellow becomes safe from the eliminations while team blue prepares for the next challenge to save themselves from getting the black apron.

© Copyright tellybest.com, 2022, 2023. All Rights Reserved. Unauthorized use and/or duplication of any material from tellybest.com without written permission is strictly prohibited.
Cached Saved on: Friday 27th of January 2023 11:59:27 PMCached Disp on: Thursday 2nd of February 2023 07:22:37 PM