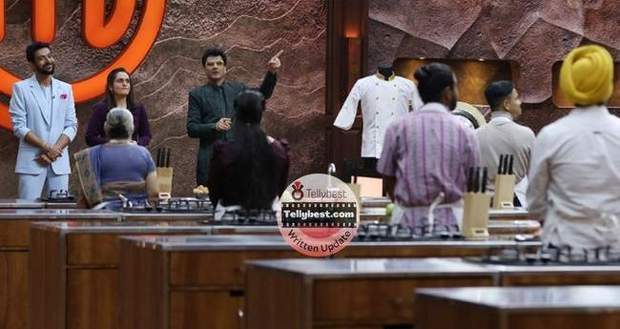 Today's Masterchef India 7 2nd January 2023 episode starts with the introduction of contestants. They belong to different cultures and realities.

The first home cook enters and introduces herself as Priyanka Kundu Biswas who is 32 years old. She is a cake artist.

She presents her dish named Bridge of Love in which she has made a moist eggless chocolate cake with ginger-based spice gnash along with cinnamon-flavored apple filling and chocolate and nuts layer with caramel sauce.

Garima moves ahead and tastes the dish, she takes another bite followed by Ranveer and Vikas.

Vikas says that the dish was perfect in moisture, flavor, texture, and crunchiness and she deserves the apron.

Ranveer says that the cake delivered its promise.

The next contestant is a farmer, and his name is Mohabbat Singh Cheema, he has made a pizza for the chefs.

He owns a food truck in Punjab but was challenged by his family members the most as they were resentful of his food truck profession.

He grows his own vegetables and milk for curd for the food truck and has prepared a paneer makhani pizza for the judges.

The judges taste the pizza with neutral looks.

Garima compliments the freshness of the pizza.

Vikas says that the presentation is quite weak, but the taste overshadows that, and Mohabbat Singh Cheema earns a place in the Masterchef kitchen.

The next contestant is another home cook named Nazia Sultana who is a housewife.

Vikas asks what importance MasterChef holds in her life.

Nazia says that if she earns a spot in MasterChef, she will have everything in life and then she presents her dish before the judges.

The name of the dish is Savoury Japanese Souffle pancake stuffed with egg yolk and vegetables.

Vikas says that he didn't expect this dish from her because of the first impression.

Ranveer asks Nazia about her life.

Nazia tells the judges that her daughter is a big foodie and also a food critic.

Her daughter Alvira's speech and hearing are compromised, and she also suffers from autism thus it is Nazia's main priority to make her daughter financially secure in the future and she believes MasterChef is the way to do it

Then Ranveer wishes her good luck for her dreams and tastes Nazia's dish.

Vikas says that he didn't expect such a difficult dish done so perfectly by her.

The chef agrees to give Nazia a spot in the master chef's kitchen.

Nazia thanks the chefs and leaves.

The next contestant enters, and her name is Dyuti Banerjee, she is from Kolkata.

She starts preparing the Tadka for her dish on the spot and then serves the entire dish to the judges.

She tells the chefs that her dish is called Bengali styles congee infused with red chili and ginger leaves along with Korean steamed egg served with mustard oil tadka.

The judges taste the dish with neutral expressions. Vikas asks that his dish is very simple so does she think it will give her a spot in the MasterChef kitchen.

Dyuti says that the dish is authentic and brings out her identity so for her there is no other dish that can buy her a spot in the kitchen.

Ranveer politely asks Dyuti to leave along with her dish.

Dyuti thanks the chefs and picks up her dish and starts leaving when Ranveer calls her back and says that she has won a spot in the MasterChef kitchen and will leave with the apron on.

The last contestant enters before the chefs.

He introduced himself as Avinaish Patnaik. He tells the judges he is doing a Ph.D. in floriculture, landscape gardening, and horticulture and was always fascinated by nature and cooking.

He has prepared a traditional dessert known as Gaintha Pitha for the chefs and has used edible flowers and has used coral jasmine in the milk.

Garima is impressed by the earthy texture of the dish and moves forward to taste it. The other two judges taste the dish as well.

At last, Ranveer says that he deserves an entry into the MasterChef kitchen. He says that his dish has tenderness, softness earthiness.

Ranveer welcomes Avinash into the MasterChef kitchen and hands him the apron.