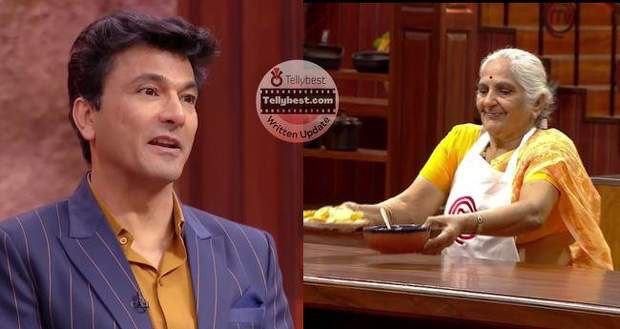 Today's Masterchef India 7 3rd January 2023 episode starts with the first contestant who is brought infront of other judges by Vikaas himself.

Vikaas visits Tinsukia, Assam, to find the talented home cook, he has come across on Instagram.

Vikaas appreciates the beautiful sense of plating, passion, and experimentation that home cooks reflect in his dishes.

However, since his father wants him to work in the tea garden business with his family, Nayanjyoti is unable to pursue his passion for cooking.

Vikaas visits him at his house, he persuades his father to let him come and join the MasterChef kitchen and his father agrees.

Vikas brings Nayan Jyoti in front of the other two judges and presents his dish himself.

Ranveer is impressed by the look of the dish and goes on to taste it.

Nayanjyoti tells the chefs that he has added milk chocolate ganache inside, with lime curd fillings served with a dry chocolate cake.

Ranveer appreciates the layers and asks to take a selfie with Nayanjyoti for his Instagram page.

While clicking the picture, Vikaas comes from behind and hands over the MasterChef apron to Nayanjyoti which breaks him into tears of happiness.

For the first time in the history of MasterChef, the chefs have come to Hyderabad to find talented home cooks but before they get into that, Vikas takes Ranveer out to taste a very special and rare dish known as Patthar ka Gosht from the street-side stall.

Vikaas introduces the dish as Pathar ka Gosht made from Phool pather also known as a rose stone.

Madurai on a plate, dessert by Aruna Vijay

An entrepreneur from Chennai who is also a content writer on Instagram, she wants to document various cuisines and also recreate all the micro cuisines.

She expresses her love for Tamil Nadu even though she is a Marwari by birth, but she has been brought up in Tamil Nadu.

Ranveer appreciates her approach toward food and different types of cuisines.

Aruna tells the judges that even though she has everything in life but still she wants to make something of her own so that her kids look up to her.

She tells the contents of her dish which includes French dessert inspired Jigar Thanda Panna Cotta and Kuttu Parotta dumplings with empty salsa with infused jasmine cream and almonds.

The judges taste her dish, Ranveer says that he is 80% happy with the dish but will give her a yes if she improves it in the next round.

Garima and Vikaas agree with him but do give their consent to give Aruna the MasterChef apron.

Deepa tells the chefs that she wants to give Sindhi food global recognition.

Ranveer tells her that Sindhi food and culture are a culture of resilience and are sustained in every part of the country.

Deepa agrees with him and then tells the chefs about her deep connection with the nostalgia for Sindhi food.

The judges taste the dish.

Vikaas goes first and appreciates the modern appeal of the dish and also enjoys the crispy Bhindi which was used for garnishing.

Garima appreciates the textures of the dish. She says that mouthfeel is an important factor in food and Deepa has excelled in it.

All the factors of flavor were present in the dish: sweetness, sourness, umami, bitterness, and spiciness.

At last, Ranveer invites Deepa to join the MasterChef kitchen and hands over the apron to her.

Syed Ajmal Ullah enters and brings the most awaited dish by the chefs, Mutton Biryani.

He tells the judges that according to him, chicken biryani doesn't qualify as biryani as it is no competition against Mutton Biryani.

He tells the judges that the dish which he has presented before the judges contains the secret recipe of his ancestors and has been carried out for 4 generations.

His Biryani is not commercial and is thus expensive, he tells the judges that he used special ingredients in a specific quantity. His rice and mutton are premia. Along with his biryani, he has also served Dahi ki Chutney.

The judges finally taste the dish with Vikaas going first. He describes the dish as magical as it has all the bold flavors including sourness, spiciness, and saltiness, Vikaas also appreciates the creative imagination used in the dish.

The judges give him the apron and welcome him into the MasterChef kitchen.

The last contestant Suvarna Vijay Bagul has brought Sunday special before the chefs.

Vikaas describes the dish as magical and art and says that it is impossible to reach this level of perfection.

The judges enjoy the dish and tell Suvarna that she is invited to join the Masterchef kitchen at which she bursts into tears realizing that her hard work has finally paid off.

© Copyright tellybest.com, 2022, 2023. All Rights Reserved. Unauthorized use and/or duplication of any material from tellybest.com without written permission is strictly prohibited.
Cached Saved on: Wednesday 25th of January 2023 01:41:26 PMCached Disp on: Wednesday 1st of February 2023 05:12:41 PM