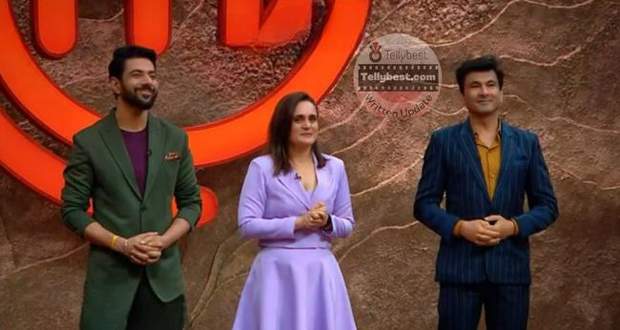 Kamal Deep introduces the contents of her dish. She tells the judges that she has prepared spicy tomato jam for the base topped by a sweet Kesar shrikhand served along with oats and almond crumble with a little bit of Tuli garnishing.

She goes on and tells the chefs that her interest in cooking ignited after her marriage, she always tries to give life to her children’s imagination of food but in a healthy manner.

Now it is time for the chefs to taste the dish.

Ranveer goes first and very precisely picks out the individual contents of the dish and puts them together on his spoon. He is intrigued by the contrasting nature of the contents of her dish.

Vikaas asks her if she had tasted the dish beforehand to which Kamal replies that she only tasted the tomato jam.

The chefs say that the contrasting elements of the dish are combined beautifully together with the help of the crumble she served. The whole dish acted like a magical song which earned her a spot in the kitchen.

He introduces the contents of his dish and tells the chefs that his dish includes pistachio-crusted Sea Bas with crispy lotus stem and Bengali mustard sauce and mustard tuveel dusted with dry coriander.

He tells Garima that he used sea base because it is a white fish with less fat content which he later added with the mustard oil while the base of the sauce is cream and curd.

Ranveer asks him to call his mother and tells her that her son has created a wonderful dish and has earned a spot in the master chef's kitchen. He complimented the texture, flavors, and taste that were balanced in the dish, also the fish was perfectly cooked, and the seasoning and spicing were even, along with an amazing presentation and innovation.

The chefs reward her with MasterChef’s apron.

Vikaas tells Urmila that he recognizes her from her YouTube channel.

Ranveer appreciates her style of talking and explaining the recipes in the videos.

The adorable old lady tells the chefs that her grandson, Harsh motivated her to start a YouTube page for her cooking recipes.

She tells the chefs that her first son expired due to a brain haemorrhage, her second child fell off the balcony and died and the third son had heart failure and died but she did not let that stop her or her dreams.

She tells the chefs that if we want to bath in the light of the sun then why are we afraid to burn in the fire of hard work.

She then asks the chefs to taste the Patra with the coriander coconut chutney which she has prepared.

The chefs enjoy the layers of the dish and also its fine texture.

Vikaas hands over the MasterChef apron to the lady.

The lady is overjoyed and says that the world is ours to seize, it is ours to conquer. If we look at the world, it will look back at us so we should not be afraid and keep moving.

The Assamese woman has brought a token of love for the judges which includes Gamchas, Rupali topi for Vikaas and Ranveer, a bridal token for Garima, and ghost chilies which is the spiciest chili in the world.

The chefs enjoy the Assamese environment she has created.

She then tells the chefs that she has prepared 3 types of sushi with the fillings of butter chicken, sesame chicken, and coriander chicken, along with this she has also prepared an orange sauce, mashed potato with fermented bamboo shoot, Thai coriander, and curd.

The chefs enjoy the dishes and appreciates the acidity she had brought to the rice with the help of bamboo which is surprising because it is usually done with vinegar.

The chefs also appreciate the creamy nature of her rice and the mashed potato with fermented bamboo shoots.

The chefs hand over the apron to her, welcoming her to MasterChef.

Shubojeet introduces his dish to the chefs.

He tells them that he has prepared a coconut-crushed fish roll stuffed with Vietnamese chicken curry.

He tells the chefs that he is an engineer by degree but making food is his passion.

He was let down by his seniors who said that making food is a woman’s department but that did not stop him instead motivated him to work harder on his passion for food.

The judges tell him that he is no longer an engineer but a foodgineer.

Vikaas tastes his dish and says that his dish is so wholesome that it doesn't need any extra sauce and he has done very refined seasoning.

Garima and Ranveer say that they love his dish as his seasoning was phenomenal and he has reached the level in the MasterChef kitchen and has earned himself an apron.

He tells the chefs that he has deconstructed the original Thai dish which is served in the form of coconut train while he has made a coconut mousse with mango jelly instead of fresh mangoes and added the crunch element with the help of pistachio and coconut crumble.

Vikaas tells him that if he had to think of textures then his dish would have been very flat but he has used bold texture in the most elegant way possible with the crunch, bitterness, the richness of coconut.

Ranveer appreciates the tropical combination of rice, coconut, and mangoes but believes that the execution could be better.

After a brief discussion, the chefs decide that they want him in the MasterChef kitchen and hand him the apron.

© Copyright tellybest.com, 2022, 2023. All Rights Reserved. Unauthorized use and/or duplication of any material from tellybest.com without written permission is strictly prohibited.
Cached Saved on: Wednesday 25th of January 2023 08:55:41 AMCached Disp on: Sunday 5th of February 2023 02:30:49 AM