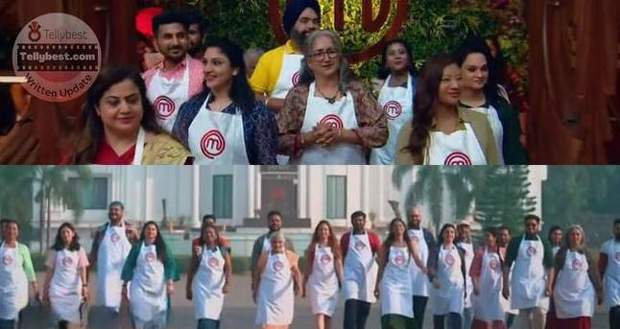 Today's Masterchef India 7 5th January 2023 episode starts with the top 16 race among the 36 contestants who are given a time of 1 hour to prepare the dish based on their identity. The first batch of 12 contestant arrives in the kitchen before the chefs out of the total 36.

The contestants have to prepare a dish that is derived from their own personality within an hour.

All the contestants go to their counters and start preparing their dish.

Vikaas appreciates Priyanka’s confidence; he tells the other two judges that she is focused and not overconfident.

The chefs go to Urmilla Baa and Brijesh and find out that both of them are preparing the same dish, Undhiyu.

Brijesh tells the chefs that his version of Undhiyu will be slightly different.

The chefs announce the 15 minutes are up and they will not taste the dish if not completed within a span of 60 minutes.

Garima asks Nazia why she chose the banana flower as it takes time to prepare it and is also very tricky and risky.

However, Nazia assures her that she wants to go through with it.

Ajmal claims that his dish is completed at which Vikaas tells him that he should check if everything is perfect in his dish or not.

Time is up, the chefs call upon the contestants to present their dishes.

The chefs call upon Santa first, she has prepared Pumpkin shaped Rongalao Pitta with a twill.

The contents of the dish include cottage cheese and the filling consists of paneer, cinnamon powder, and dry fruits.

She tells the chefs that it is a lost recipe.

Ranveer appreciates the creativity and tells her that it is incredible how innovative Santa is even though she lives in a village.

The next contestant is Priyanka, and she has prepared Bengal tropical paradise served with Gonduraj lemon zest, chocolate coconut dome and coconut crumble along with these she has also prepared chilly mango pineapple sauce.

Ranveer appreciates the authentic flavors but believes the dome could be improved a little.

Avinash is the next contestant and has prepared flavors of Tatini.

The chefs say that the flavors of his sauce and fish have come out beautifully together.

Next comes, Kadaknak chicken is prepared by Syed Ajmal Ullah.

The chefs tell him that his gravy has gone bitter because he was in a hurry and did not recheck.

Next, Nazia prepares Nargisi Kofta and banana flower along with the cheesy mint sauce.

Ranveer applauds her innovation and thought.

The next contestant is Aruna who has presented Rasam rice which includes Pappadam, Poriyal, rice noodles, rasm broth and thogyal chutney.

Vikas acknowledges the colors of her dish along with the texture techniques.

The next contestant is the most beloved Urmilla Ba, who has prepared Undhiyu and Puri, Brijesh has also served the same dish to the chefs but along with muthiya savory a cheesecake.

However, due to the lack of time, he could not prepare the sauce.

The chefs simply love the dish put forward by Urmila baa and hand her the apron there on the spot as a special case.

The last dish is presented by Gulkirat who has prepared a Tortellini with an Indian touch.

Ranveer tells Gulkirat that he has an eye for colors and has done an amazing job on the colors.

Urmilla Baa has already wowed the judges with her amazing dish and has won an apron to the next round.

The chefs announce the next winner of the apron who is, Priyanka as her dish was simply perfect.

The third apron goes to Aruna for her Rasm rice noodle.

The judges give the fourth apron to Santa and Garima claims that she is a fan of her taking-risk approach.

The fifth apron is won by Avinash.

However, there is a tie between Gulkirat and Nazia, and they are put on standby until the next round.

The remaining four contestants are appreciated by the judges who wish them luck for their future.

Now it is time for the next batch of 12 contestants to come and compete for the top 16 aprons.

The chefs give them the same task of preparing a dish based on their personalities within a span of 1 hour.

© Copyright tellybest.com, 2022, 2023. All Rights Reserved. Unauthorized use and/or duplication of any material from tellybest.com without written permission is strictly prohibited.
Cached Saved on: Wednesday 25th of January 2023 09:03:26 AMCached Disp on: Tuesday 31st of January 2023 06:59:55 PM