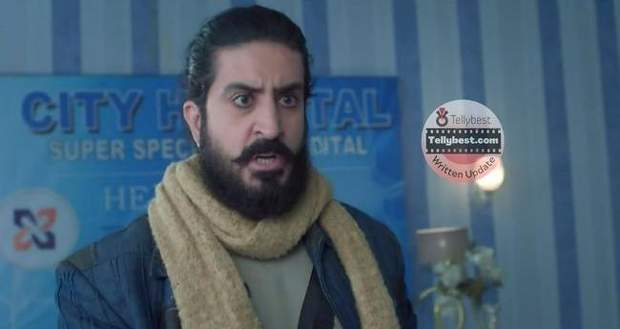 Today's Meet 10th January 2023 episode starts with the special force entering the hospital while the lady terrorist informs the Chief about them.

Chief signals the terrorists and they all tie Meet Hooda and Meet Ahlawat to a chair and cuff them to each other with handcuffs.

Further, the Chief makes a circle around them using fuel and tells them that they got married in the presence of the holy fire and now they will die in the fire only.

The terrorists leave the room while the Chief lights the fuel circle on escape.

Meet Hooda tells Meet Ahlawat that the terrorists should not escape and frees her hand.

She touches Meet Ahlawat's face and asks him if he's fine while he tells her that she should be happy to have a husband who is even willing to die for her.

Further, she unties him and they both escape from the burning room while they watch the terrorists leave.

Meet Hooda notices the bombs lying on the ground and they both throw them toward the terrorists.

The bomb blast happens and the terrorists fall unconscious while Meet Hooda and Meet Ahlawat run to the escape room.

However, the chief comes after them and laughs at them maniacally while telling them they have only two minutes and the people on the ground will die too if they go there.

With the sudden realization of the threat, Meet Ahlawat touches the bomb that the terrorists had attached to him.

Meet Hooda hugs him as she tells him that she has no complaints from death if it is with him.

Meet Ahlawat cries and tries to make Meet Hooda laugh by saying that she is stuck to him from the start.

He tells Meet Hooda to not be romantic at a time like this while she tells him that she cannot leave him.

Further, Meet Ahlawat cries and tells Meet Hooda that he loves her while asking her if he can take her into his arms for the last time.

The bomb ticks as only twenty seconds are left while the couple hugs each other and recalls their memories together.

Meet Ahlawat removes the handcuff from Meet Hooda's hand and takes her in his hands while telling her that he loves her.

Meet Ahlawat gets emotional and tells Meet Hooda that they will meet again and will be each other's in another life time.

Suddenly, Meet Ahlawat throws Meet Hooda out of the window and she lands in the net while she sees Meet Ahlawat apologizing to her by folding his hands.

The window errupts into flames as the bomb blasts while Meet Hooda and the Ahlawat family look on in shock.

© Copyright tellybest.com, 2022, 2023. All Rights Reserved. Unauthorized use and/or duplication of any material from tellybest.com without written permission is strictly prohibited.
Cached Saved on: Wednesday 25th of January 2023 10:42:57 AMCached Disp on: Wednesday 1st of February 2023 08:42:29 PM