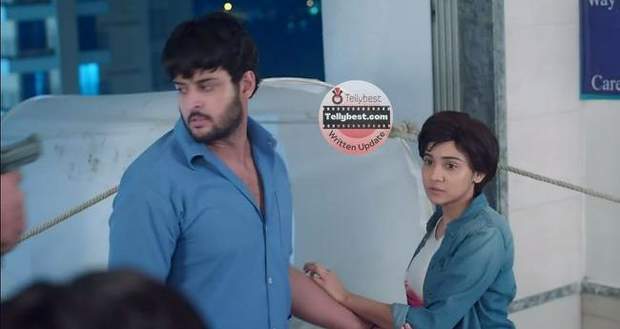 Today's Meet 11th January 2023 episode starts with Babita talking to someone and then telling Raj that Meet Ahlawat's dream of the factor is going to come true.

Babita tells Raj that Meet Hooda told her she has gotten all the papers of the land where they are going to build the factory.

Meanwhile, Raj says that for the past year, Meet Hooda has been giving her all to make sure that the factory gets established.

On the other hand, Meet Hooda drives by the milestone of Sarkarpur and stops at a tea stall to ask if the way goes to Ranipur or not.

The elderly asks her if she's a man or a woman and Meet Hooda removes her helmet shocking everyone.

Meet Hooda jokes that there will be a mosquito in his mouth if he keeps it open.

Further, the elderly respond that the village is Ranipur only on paper since the villagers call it Sarkarpur.

Meet Hooda thanks them and leaves to meet the person she will buy the land from.

Pathetic condition of ladies in the village

In the village, all the ladies work while the tattoos of their husbands they are being written on their hands.

Sarkar's Molkki washes clothes and tries to warm herself with the heater when Sarkar's wife comes there and tortures her.

She taunts her for not being able to bear a child and is about to burn her hand when the younger Bahu comes there and informs her that they have to leave for the ritual.

The ladies further go to the wedding and try to force the bride to write the name of her husband on her hand while the bride refuses.

Just then, Sarkar and his three sons Dhanram, Narendra, and Mahendra enter and stop Sarkar's wife.

He tells her that he should not force the first and the bride removes her veil feeling grateful.

The ladies get shocked when Sarkar removes the bride's veil and announces her as the whole village's bride while he sits on the throne and consoles the groom by saying that they will find him another girl.

On the other hand, Meet Hooda gets stopped by Sarkarpur's Maryada Police who demand she read the 10 rules of Sarkarpur.

Back in the village, the Sarkar family does the aarti while a girl wearing a green dress escapes from there leaving her jewelry behind.

However, Sarkar notices the girl leaving and picks up the jewelry while he shouts Meghana's name.

Back on the land, Meet Hooda laughs as she reads the rules dehumanizing women and making men the gods as she tears them away.

Sarkar's treatment towards his wife and viewpoint towards ladies

At Sarkar's house, he asks his wife if she taught her daughter to dream when she is a woman in Sarkarpur.

He asks her angrily if he should bring in another wife and she refuses while looking down in shame.

On the other hand, Meet Hooda beats up the Maryada Police and is leaving when she accidentally hits Meghana with her bike.

As an apology, Meet Hooda helps her by giving her a ride to the bus stop and asking her if she needs any more help.

At home, Meet Hooda sees Meet Ahlawat's picture and wonders why it is different but does not speak about it thinking that Raj must have had some memory of the picture.

At the same time, Raj and Babita also wonder where the picture came from but decide not to speak about it thinking that Meet Hooda must have some memory attached to it.

Back at Sarkarpur, three men arrive at the bus stop to take Meghana back but she gets into the well to escape.

Later, Meghana is tied and she shouts for help seeing Sarkar coming towards her.

However, Sarkar comes there and removes the rope as he asks her about the man whom she tried to elope with.

Meghana says that there was no man and that she escaped to die but Sarkar does not believe her.

He even shows Meghana a picture which turns out to be Meet Hooda giving her a ride.

Just then, Mahendra comes with the beaten-up Maryada police and tells Sarkar that Meghana was right as the person giving her a ride was a girl who has broken all the village's rules.

The next day, Meet Hooda, Raj, and Babita are set at the land with the Panditji for the Pooja while Sarkar, his sons, and his goons come there.

Sarkar douses the fire with water and Panditji runs away after seeing him while Meet Hooda stands up angrily.