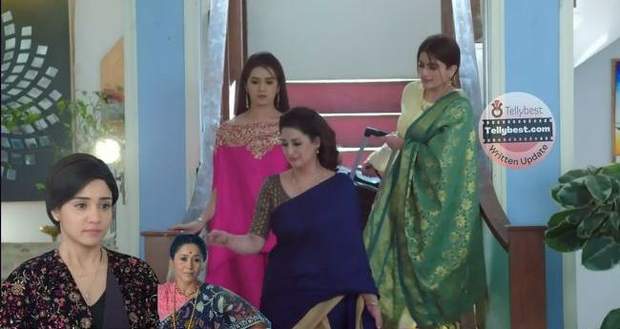 Today's Meet 12th December 2022 episode starts with Meet Ahlawat telling the family members that he talked with the registrar and the lawyer has assured him that he will take some action and will find the mansion papers.

Just then, they hear an announcement about the auction of the Ahlawat family happening after five days.

The announcer says that all the items inside the Ahlawat house will also be auctioned and tells them to come after 5 days at the auction.

The family comes outside and gets shocked to see the posters will the family's picture in them and details regarding the auction.

Just then, the registrar comes there and tells Meet Ahlawat that Barfi Devi has become the most influential person and he will not do anything like giving them the original documents that will infuriate Barfi Devi.

The announcer starts shouting with more enthusiasm while Meet Ahlawat gets angry and brings a wooden stick with him which he uses to threaten the announcer.

He further holds both the registrar and the announcer by the neck and threatens to set their office on fire while the family members try to stop him.

Meet Ahlawat further destroys the announcement equipment and gets physical with the registrar as he tears the legal papers for the auctioning.

Later, Meet Hooda drenches Meet Ahlawat in cold water and tells him to calm his anger as they cannot take any wrong action.

However, Meet Ahlawat argues that Barfi Devi tried to humiliate his father which he cannot handle.

Meet Hooda tries to explain to Meet Ahlawat that Barfi Devi is waiting for them to take some wrong action and that they should not give in to her traps.

The next morning, Raj receives a video of Meet Ahlawat getting physical with the registrar and the announcer and gets surprised to see it.

Just then he gets a call from Barfi Devi who tells him that Meet Ahlawat has rained curses on both her and the government officials which can put him in jail.

She asks him if she should send the video to the police station and tells him that even his connections won't be able to bring him out.

Raj requests Barfi Devi to not send the video anywhere while Barfi Devi tells him to make sure that Meet Hooda and Meet Ahlawat do not try to stop the auctioning.

She disconnects the call while Raj calls his lawyer and tells him to prepare the file for the case against Barfi Devi.

However, the lawyer tells Raj to pay his fees of 2 lakhs first, and then he will prepare the file.

Later, Raj comes to the hall and tells Meet Hooda and Meet Ahlawat to not interfere in the matter and that it is his order.

Meet Ahlawat tries to argue while Raj silences him telling him to remember that he is the elder.

Afterward, Babita gives her jewelry to Raj and they both go to the jeweler to sell it so that they can get the money to pay the lawyer.

On the way, Babita stops by the vegetable seller and starts buying things while Raj teaches her how to buy things properly.

A little far, Barfi Devi gives money to a lady who goes to the same vegetable stall and acts of buying things.

However, she steals the seller's phone and puts it in Babita's purse to frame her as a thief.

The vegetable seller tries to find his phone while the lady offers to ring his phone and the phone starts ringing from Babita's purse.

Babita gets confused as she takes the unknown phone out of her purse while the lady starts drama of Babita trying to steal from the poor seller.

She gathers people and they push Raj away while the lady covers her face in soot and tells Babita that she will blacken her face and will write on her forehead that she is a thief.

Before the lady can touch Babita, Meet Hooda comes there and grabs her hands midair.

© Copyright tellybest.com, 2022, 2023. All Rights Reserved. Unauthorized use and/or duplication of any material from tellybest.com without written permission is strictly prohibited.
Cached Saved on: Wednesday 25th of January 2023 06:19:42 PMCached Disp on: Sunday 5th of February 2023 04:12:00 AM