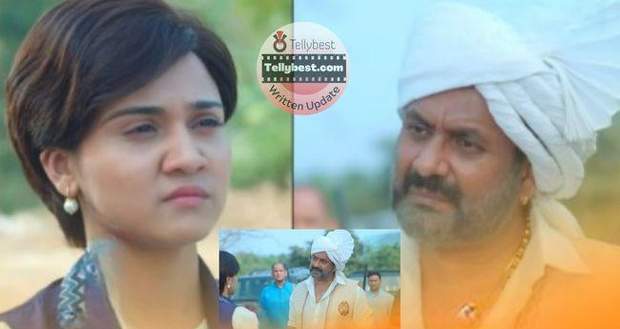 Today's Meet 12th January 2023 episode starts with Babita asking Panditji where he is going while Meet Hooda questions Sarkar about who he is.

Sarkar mocks her why saying that it is a joke that a girl from the city has come to build her women-only operated factory in Sarkar.

A Sarkarpur where the ladies are not even allowed to look out of their home without their husband's permission and cannot get free from pleasing and taking care of their husbands.

Sarkar taunts her about breaking the rules of the village and tells her that he is willing to give her three times the money to leave.

However, Meet Hooda taunts Sarkar by asking him if his village is built on Moon that their rules differ from the nation's laws.

Meet Hooda leaves and Mahendra jokes saying that the girl has understood her place while Meet Hooda throws the brick into the muddy puddle.

The splashes fall on Sarkar's face and Mahendra gets angry while Meet Hooda tells him that the pillar for the factory has been made while stating that from now on the nation's rules will apply here too.

Later, Sarkar and his sons return home while Sarkar's wife sees the mud marks and questions what happened.

However, Sarkar does Shayri for her and she goes inside the house thinking that he is hiding something from her.

Back at the land, Meet Hooda talks with Inspector Neeraj Bhati who tells her that she should not go against someone like Sarkar.

However, Meet Hooda tells him that the factory is not only a project for her but a dream that she will complete at any cost.

Neeraj gets impressed with her and tells her that she has support from the police.

On the other hand, Sarkar tells Mahendra to find out about Meet Hooda so that they can take their revenge.

At night, Meet Hooda tells Raj and Babita that she will change and will eat together afterward.

Meet Hooda wonders about the picture while Raj and Babita also wonder the same.

Back in Sarkarpur, Sarkar greets Inspector Neeraj while the Minister orders him to release Chatkan from police protection as Sarkar has taken responsibility for him.

At the same time, Meghana is dressed in bridal attire as she begs to not be married as she wants to study further.

However, Sarkar's wife burns her scholarship certificate in front of her and taunts Meghana's mother for birthing only girls.

The next morning, Meet Hooda comes to her land with Inspector Neeraj when she gets angry seeing cows and herd there.

The villagers arrive there along with Sarkar and his goons while Meet Hooda removes the animals from the land.

However, Sarkar brings Chatkan in front of her and shows her the land papers while informing her that the land that Chatkan sold her is already given to him.

Meet Hooda gets shocked while Neeraj tells her that he will get the papers authenticated as the villagers argue that they are the witnesses of the exchange of land between Chatkan and Sarkar.

The villagers leave while Mahendra has his driver drive the car over the muddy puddle which splashes on Meet Hooda's face.

Mahendra also throws a box of tissue paper after her to mock her.

The next day, the preparations for Lohri are going on while Neeraj and his team come there with the arrest warrant for Sarkar.

He asks who dared to file a case against him while Meet Hooda comes there and announces that she is the one who did it.

© Copyright tellybest.com, 2022, 2023. All Rights Reserved. Unauthorized use and/or duplication of any material from tellybest.com without written permission is strictly prohibited.
Cached Saved on: Wednesday 25th of January 2023 12:54:25 PMCached Disp on: Tuesday 31st of January 2023 07:28:26 PM