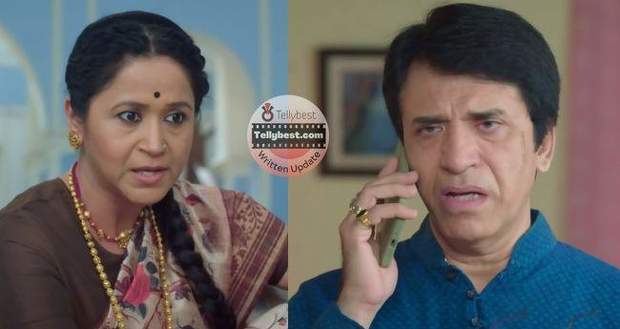 Today's Meet 13th December 2022 episode starts with Meet Hooda pushing the lady away as she makes the lady's face black with her own hands.

Meet Hooda asks her how dare she do such a thing and apologizes to Babita for letting such a thing happen in her area.

Meet Hooda tells Raj to take Babita away while she talks with the lady.

Once the couple leaves, Meet Hooda asks the lady who she is since she is not from the area.

On the other hand, Ishani is talking to someone on the call for a job at the pizza shop when Masoom overhears her and asks her about it since Ishani had wished to further pursue her studies.

Ishani tells her that seeing the situation of the family, she wants to help them by doing a job which makes Masoom shed some tears as she realizes that she has been really selfish.

Ishani tells her that it is not too late and Masoom agrees saying that now both the sister will look for a job and will help the family.

Back in the market, Meet Hooda threatens the lady when she reveals that an old lady (Barfi Devi) gave her money to humiliate Babita and Raj.

However, Meet Hooda figures out that it is Barfi Devi's wrongdoing and goes to inform Meet Ahlawat about it.

Meet Ahlawat gets angry as he says that he cannot see his parents getting humiliated in front of the whole society.

Meet Hooda calms Meet Ahlawat and tells him that she has a plan which she whispers into his ear for which Meet Ahlawat praises her.

Later, Meet Hooda and Meet Ahlawat hide near a tea stall when they see the registrar coming there and call someone.

As the registrar is taking his tea, a man loudly talks on the phone about needing to find a palace-like mansion for a very royal-like rich client of his.

The registrar gets excited as he talks to the man and after deciding his commission, calls Barfi Devi saying that he has a client for the Ahlawat mansion.

Back at the Ahlawat mansion, Barfi Devi tells Raj and Babita that their footsteps are very lucky since she just got a call that the queen of Paristan wants the house.

Barfi Devi arrogantly sips her tea while Raj tells Barfi Devi that he does not care since his treasure is his family.

Raj states that he came to inform her that he has stopped both Meet Ahlawat and Meet Hooda from interfering in the auction.

As they are leaving, Barfi Devi stops them by saying that they have to pay a price to her for not going to the police station and shows them the video of Meet Ahlawat beating up the registrar.

Babita asks her what she means while Barfi Devi mocks them saying that they know the mansion more than anyone else and she needs someone to obey her commands.

Raj and Babita's eyes go wide as Barfi Devi tells them that she wants them to become servants of the Ahlawat mansion and asks them about their decision.

Raj holds Babita's hand and tries to drag her away while Babita tells Barfi Devi that she accepts being a servant if her family can be saved.

On the other hand, Meet Hooda and Meet Ahlawat apologize to the picture of Raj and Babita for the plan they are going to execute by saying that they are doing it for the family.

Back at the Ahlawat mansion, Raj asks Babita what she is saying while Babita tells Raj to promise that he will not tell the family about this.

The next day, Barfi Devi degrades Raj and Babita for wearing fine clothes while giving them ugly and dirty clothes to wear.

At the same time, Meet Hooda comes to the Ahlawat mansion in the disguise of the queen of Paristan while Meet Ahlawat is with her as her manager-cum-personal assistant.

© Copyright tellybest.com, 2022, 2023. All Rights Reserved. Unauthorized use and/or duplication of any material from tellybest.com without written permission is strictly prohibited.
Cached Saved on: Thursday 26th of January 2023 03:20:05 AMCached Disp on: Tuesday 31st of January 2023 06:03:39 PM